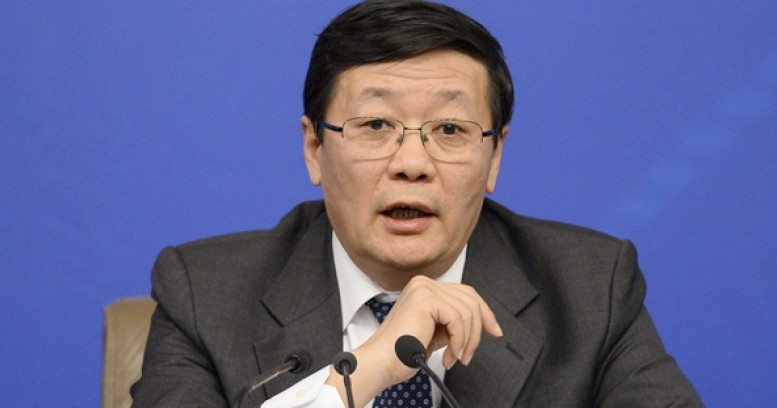 Xing Yun via Caixin | Acknowledge the elephant in the room, but don’t exaggerate its weight. That’s the simple way of expressing Minister of Finance Lou Jiwei’s attitude as a policymaker toward the big risks looming over the global financial system, including China’s US$ 12 trillion economy. He sheds light on G-20 negotiations and the reasoning behind a successful outcome.

It’s a view Lou shared while hosting major-economy counterparts at a two-day meeting of the Group of 20 finance ministers and central bank governors in Shanghai. It also shaped his comments on tax reform and “government support” for banks saddled with bad debt at a National People’s Congress press conference March 7 in Beijing.

Lou also stressed the point on March 2 during an interview with Caixin. “We should face up to problems and risks,” he said at his Beijing office, “but not exaggerate them.”

Lou and People’s Bank of China Governor Zhou Xiaochuan coordinated the February 26-27 meeting. In the end, the Chinese delegates agreed with other G-20 leaders to use collectively and as individual countries all available policy tools – including those in the monetary, fiscal and structural arenas – to foster market confidence and strengthen a global economic recovery, according to a post-meeting communiqué.

In the interview, Lou described the successful G-20 negotiations on fiscal reform and monetary policy that preceded the consensus agreement. He noted that, in general, finance officials from the world’s largest economies share a cautiously optimistic outlook in the face of increasingly serious vulnerabilities and risks.

Some G-20 leaders clashed over how to apply fiscal policies, he said. But eventually they agreed to use these tools “flexibly” to strengthen economic growth, job creation and market confidence, while working toward sustainable debt management. And for the first time, Lou said, G-20 leaders committed to pursuing structural reforms in their countries to strengthen the global economy.

Caixin: What conclusions did finance leaders at the G-20 meeting in Shanghai reach about prospects for the global economy?

Lou Jiwei: I closely watched global market moves during the Lunar New Year holidays. I saw fluctuations in stock, bond, commodity and gold prices. It seems global investors hold a pessimistic outlook. A general view emerging from the meeting was that recent market volatility does not reflect underlying fundamentals of the global economy. We forecast that most advanced economies will expand at a moderate pace, and that growth in key emerging market economies will remain strong. The consensus reached is that we should face up to problems and risks, but not exaggerate them.

At the meeting, there were disagreements over how to implement fiscal policies. For instance, Germany’s finance minister, Wolfgang Schauble, opposed the use of fiscal stimulus. How was an agreement eventually reached?

Every country differs in economic conditions and policy focus. Some countries advocated short-term stimulus. But others were opposed because they thought such stimulus would only hide risk, and instead they called for structural reforms to boost growth. Also, some of the countries with heavy welfare burdens lack the capacity to implement additional fiscal policies. After negotiating, we agreed that countries with enough room for monetary and fiscal stimulus could use those policy tools, but not excessively. In the final communiqué, we agreed to “use fiscal policy flexibly to strengthen growth, job creation and confidence, while enhancing resilience and ensuring debt as a share of GDP is on a sustainable path.”

There were also disagreements over monetary policies. Can you explain?

Negotiators focused on the negative interest rate policy. Some countries advocated a continuation of quantitative easing. Others opposed the use of negative interest rates, saying monetary policymaking had reached its limit and that alternative measures such as fiscal policies and structural reforms should be found. The use of negative interest rates will deteriorate bank balance sheets and may lead to systemic risks. The meeting participants agreed that monetary policies will continue to support economic activity and ensure price stability, consistent with the mandates of central banks, but monetary policy alone cannot lead to balanced growth. Further fiscal policies and structural reforms should be promoted.

Although G-20 members reached a consensus, different countries will be unable to deliver on some policies because of their differing economic conditions. Will this situation leave the door open to hot money flows affecting major economies?

Economic conditions and opportunities for fiscal and monetary policy implementation differ from one G-20 country to another. It is impossible for all of them to implement the same policies at the same time. But we agreed to adopt all possible policy tools, including monetary, fiscal and structural reform policies, to boost market confidence and revive economies. Inconsistent policies do not necessarily lead to disruptive capital flows. As long as a country’s economic needs and market expectations are met through the use of policy tools, there will be no disruptive capital flows.

A lot of discussion before the G-20 summit focused on a “New Plaza Accord.” Was the topic discussed?

Media reports said a “New Plaza Accord” would be signed in Shanghai, but that was just a media fantasy. The proposal never existed. International Monetary Fund Managing Director Christine Lagarde made it clear at a press conference that the 1985 Plaza Accord was a deal to address the crisis at that time, while the goal of the latest G-20 meeting was to prevent a crisis. Countries negotiated exchange rate issues at the Shanghai meeting. But unlike the Plaza Accord, which is an institutional arrangement, the latest negotiations were informal exchanges on the issue.

China’s progress with implementing structural reforms attracted a lot of attention at the Shanghai meeting. Various opinions were expressed. You highlighted the importance of orderly reform. Can you address this topic?

Since 2009, G-20 countries have been paying more and more attention to structural reform. But this was the first time for a (G-20) meeting to attach such great importance to this topic. The focus in the past was on short-term policy as an immediate remedy for significant, short-term risk. But now that some mid- and long-term problems are emerging, everyone realizes that fiscal and monetary policies alone can’t restore growth. Fiscal policies can support structural reforms. This is consistent with China’s viewpoint. And since we took over the presidency of G-20 last December, we have been pushing forward a structural reform agenda.

Reforms have both short-term and long-term effects. Measures with short-term effects may or may not be effective in the long run. The reform process means that while using short-term measures to stimulate growth, we should also prepare for measures that have greater, long-term effects but cause short-term pain. Reform is a painful process that involves cutting capacity and inventory, and deleveraging. It requires fiscal policy support to deal with issues such as layoffs and company restructurings. Structural reform is a systemic project and an art. Simple equations cannot be used to calculate its pace. It should be carried out under the main principles and take into consideration trade-offs.

China has proposed setting reform priorities and guiding principles, as well as developing a system for monitoring the progress of structural reforms. These were accepted by other G-20 members. Can you tell us more?

The important indicators of the system include labor productivity and fiscal sustainability, as well as whether or not a reform is environmental friendly. After negotiations, the G-20 approved prioritizing trade and investment promotion, labor market reform, innovation and improved fiscal sustainability.

At the meeting, you mentioned China’s structural reform measures. What are they?

China has a lot of opportunities to implement structural reforms because we have serious distortion problems. We’ve launched short-term and long-term measures … The most obvious is decentralization. Individuals and companies, especially mid-sized and small companies, have seen administrative procedures significantly streamlined and simplified, encouraging innovation and start-ups. There have also been pricing system, taxation and urbanization reforms.

Does China have what it takes to implement fiscal policy that supports structural reform?

China still has room for further fiscal policies. The current deficit to GDP ratio is 2.3 percent, which is not high when compared to the 3 percent red line set by the Maastricht Treaty. Last year, the central and local governments’ (combined) debt-to-GDP ratio, for which they have direct repayment responsibilities, was nearly 40 percent. The ratio of debt for which they have indirect repayment responsibilities may vary according to economic conditions. But, in general, there is still room for government debt capacity.

Was there any discussion about China’s risks associated with government debt?

There were no specific discussions about China’s government debt issues, but G-20 countries were understanding. To ease the financing pressures affecting local governments, we launched a debt-for-bond swap program in 2015. The program is continuing this year. According to data on maturing debts held by provincial governments, the risks are under control.

Were there any achievements related to the multilateral development of banks?

A proposal was made to increase funding for multilateral development banks and push forward reforms to improve these institutions’ capacities to mobilize resources. Cooperation between old and new multilateral development banks was also encouraged. We invited the Asian Infrastructure Investment Bank, the New Development Bank for BRICS and other newly established institutions to participate in some discussions.

Can you mention the topics addressed during the Base Erosion and Profit Shifting (BEPS) discussion?

The Organization for Economic Cooperation and Development (OECD) has done a lot of work on BEPS and has proposed 15 steps. At the meeting in Shanghai, we led negotiations on BEPS to give more consideration to the interests of developing countries, thus helping promote a more balanced view. This led to one of the meeting’s major results.

In the communiqué, we agreed “to ensure a consistent global approach. We endorse the inclusive framework proposed by the OECD for global implementation of BEPS, and encourage all relevant and interested non-G-20 countries and jurisdictions that commit to implementing BEPS, including developing countries, to join in the framework on an equal footing. We support that the specific challenges faced by developing countries in BEPS implementation should be appropriately addressed under the framework.”