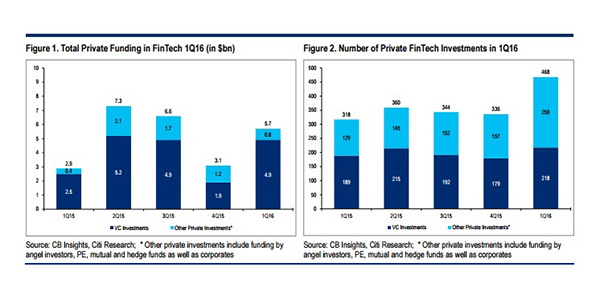 Citi | FinTech Remain Hot: According to the latest data published on 25th May by CB Insights and KPMG, there was a revival in FinTech investments in 1Q16 from a soft 4Q15. A total of 218 investments were made by VC-backed FinTech companies in 1Q16 raising $4.9bn in funding globally, almost doubling yoy and up 160% qoq. The trend for FinTech is noticeably more resilient than total VC funding for all sectors (-8% yoy). Total FinTech investments (including PE, hedge funds and corporate investments) were at $5.7bn, up 97% yoy and 84% qoq.

China, followed by the US:

The strength in FinTech investments was mainly driven by mega deals in China. Lu.com and JD Finance raised $1.2 and $1.0bn respectively this quarter. The third largest FinTech deal was Oscar Health Insurance in North America that raised $0.4bn. The top three together contribute to 45% of total FinTech investments. As we discussed in our recent GPS report, China is leading the world in FinTech and has well passed the tipping point. A lot of China’s FinTech companies are backed by Internet giants and have a large customer base. As these “mega” FinTech companies seek funding in coming quarters, Asia should continue to attract the most dollars invested in FinTech.

We looked through the 25 largest FinTech deals in 1Q16. By dollar invested, lending dominated, contributing to c70% of total investments. Insurance Tech grew rapidly, making up of 13% dollar invested. Payment on the other hand, only attracted 4% of total investment. By number of investments, 10 out of the 25 largest deals were on lending (40%), followed by Insurance (16%) and payment (12%). We prefer FinTech business models that are based on big data analytics and capital light (ecommerce payments, credit scoring). We are more cautious on the lendingbased business model as it is most at risk from increasing regulatory scrutiny.

Annualizing the 1Q16 run-rate for total investments would result in 20% yoy higher investments in FinTech from the $19bn level in 2015. We expect the momentum in FinTech investment to continue into 2Q. For example, Ant Financials’ $4.5bn funding in April already underscores a strong second quarter. But with LendingClub and OnDeck share prices down 70-80% from the peak, the weakness in public valuations of Marketplace lenders could affect the valuation of private funding rounds in this segment. Also, at our Napa conference this week, it was noted that VC funding was slowing for Blockchain but bank interest was still strong.