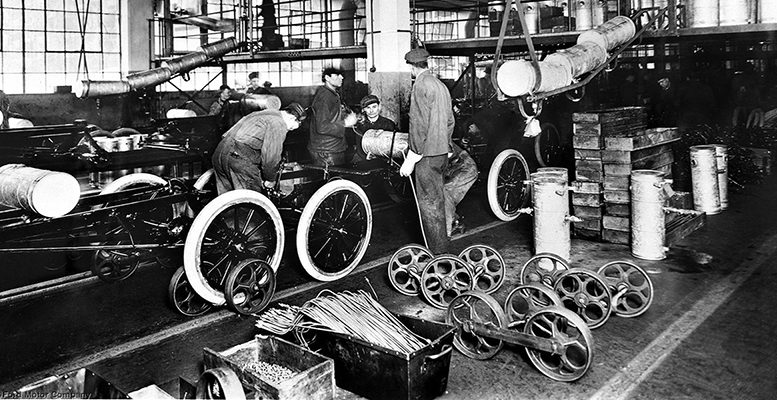 1913: At the Highland Park Plant in 1913, Henry Ford introduced the first moving assembly line for cars.

Laurie Wright (The Conversation) | Nearly half of the tasks currently undertaken by humans could already be automated, even at current levels of technology. Within the next decade it is likely large sections of society will be looking for new jobs.

People are calling it the fourth industrial revolution or “industry 4.0”. The first industrial revolution used steam power to mechanise production. The second used electric power to mass produce products while the third introduced computers to automate production. The fourth revolution is happening now, disruptive technologies including the internet of things, virtual reality, robotics, and artificial intelligence are changing the way we interact, work, and live. Highly automated, intelligent systems promise to transform people’s lives and even question the very role of humans.

What will all this mean for climate change? The answer is complicated. These innovations have the potential to significantly reduce greenhouse gas emissions and provide unprecedented levels of insight and data to mitigate climate change. But without proper consideration mass automation could be bad news, increasing consumption and emissions.

To consider what mass automation might mean for our environmental impact, I want to look at two sectors where human work has already been largely replaced by machinery: agriculture and cars.

At the beginning of the 20th century cars were a plaything of the rich, out of the reach of the average person. But that was before Henry Ford perfected the assembly line concept, and rapidly came to dominate nearly half of the American automobile market.

Before Ford, cars were an artisan product, individually built by hand by teams of skilled craftsmen. Once one car was completed the team could start work on the next. Ford reconfigured this process, with multiple stations working on specific assembly processes, with each car moving from one manufacturing process to the next in order of assembly.

Today, car manufacturing is largely fully automated, with human teams replaced by robotic workers. Robots and other technologies of industry 4.0 enable more efficient energy management in factories. And better data means better managed supply chains. This has allowed manufacturers to reduce waste and emissions across the entire lifecycle of products such as cars – from the initial metals and minerals, through to the energy used to transport products to market.

Farming has a huge environmental impact

Much like Ford’s cars, developments in mechanisation – tractors, combine harvesters and so on – have allowed more food to be produced with less labour. Despite this, with the world population and demand for food rapidly rising, agriculture is responsible for increasing greenhouse gas emissions and an enormous share of environmental degredation. It is vital we find ways to further improve efficiency and reduce the emissions from our food production.

But, as with cars, agriculture will fundamentally change with the advent of mass automation and smart technologies. Robots are already replacing human labour across a range of agricultural tasks from watering to pest control or harvesting. Even tractors could eventually become autonomous. Fully automated, vertical farms are being built, maximising space and production efficiency. These and various other innovations and emerging technologiesincluding off-grid renewable energy systems all promise to produce food more efficiently, reducing emissions.

These developments might suggest that these tech developments will reduce emissions and help the environment. After all, robots can build cars and grow food more efficiently than humans, right?

The issue is while there has been a significant improvement in energy and resource efficiency, there has not been an absolute reduction in environmental impact. In fact, overall environmental impact is generally increasing. Some commentators even argue that improvements in technology have actually driven an increase in consumption, a phenomenon commonly referred to as the “rebound effect”.

With cars for example, the efficiency savings made by robots have meant more people can afford to buy a new vehicle, increasing the numbers on the roads and the overall emissions from our roads. Even if many of these vehicles were replaced with zero-emission electric cars, there are still emissions associated with production and disposal and electricity supply.

Similarly, automated processes and huge industrial farms have meant more food can be produced more efficiently. However, cheaper food and increasing average wealth are increasing consumption of high impact foods such as red meat, which is likely to have significant consequences for climate change and biodiversity.

So, yes, increasing automation and smart technologies do promise sweeping changes to society, with the potential to liberate human populations from the mundane. If managed carefully this technological revolution has the potential to provide significant environmental benefit. But that is a big if. Automation will not necessarily deliver a positive outcome for sustainability – we need to manage our consumption, even as the latest technological revolution races ahead of us.

*Laurie Wright is affiliated with the American Center for Life Cycle Assessment (ACLCA) and the Forum for Sustainability through Life Cycle Innovation (FSLCI).