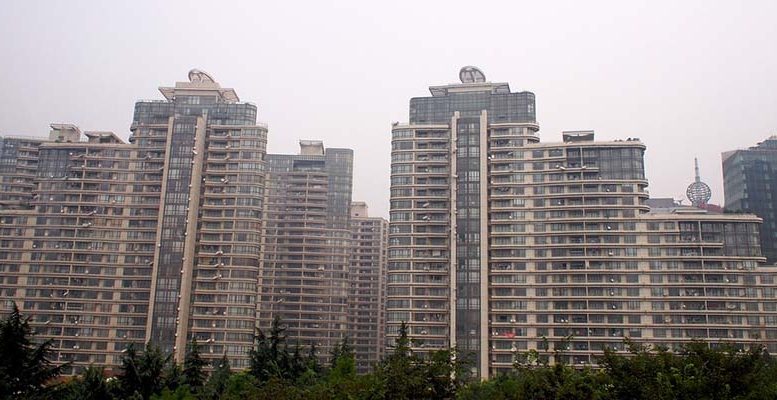 Caixin | Late summer and early autumn is traditionally a hot season for property sales in China. But now the market is on fire.

In 30 major cities, August property sales by floor space increased 27 percent year-on-year to 22.9 million square meters, according to the Shanghai-based E-House China R&D Institute, a market analysis firm. And in 100 major cities tracked by the China Index Academy, a housing market research agency, the average price in August for a newly built apartment jumped 13.8 percent from a year earlier.

Meanwhile, rival property developers are driving urban land prices higher by competing at city government land auctions. New price records have been set across the country, according to media reports. For example, a plot in Shanghai recently sold for 11 billion yuan ($1.6 billion), about 100,000 yuan per square meter, a historic high.

Shanghai home sales have been so strong that, in response to speculation that the government might tighten home-buying rules, married couples who wanted to buy a second home for an investment before a possible clampdown lined up to file for divorce, a move allowing them to buy homes separately.

A real estate industry analyst who asked not to be named said many Shanghai residents consider real estate a better investment target in face of a weakening yuan and volatility on China’s stock markets.

Some market analysts have linked the hot property market to rising liquidity. The fact that housing prices “are constantly rising in Beijing, Shanghai and Shenzhen is entirely a monetary phenomenon,” according to a report issued by Shanghai-based Haitong Securities.

Others analysts have linked the red-hot market to a surge in mortgage lending by banks and bonds issued by property developers. They include market watchers such as Liang Hong, chief economist at the investment bank China International Capital Corp., who have raised leverage risk concerns.

After noting that the value of mortgage loans issued between January and July rose more than 31 percent year-on-year, Liang called the boom unsustainable. He also said the mortgage field was being closely monitored by government regulators.

And that’s exactly what happened in late August in the cities of Wuhan and Xiamen, where government officials announced new restrictions on local home purchases after citing fears of a dangerous market bubble.

Meanwhile, some analysts say the central bank might try to curb the property market later this year by tightening the nation’s money supply.

A fear that the government might throw cold water on the real estate rush has stirred residents of Shanghai, Shenzhen and other cities to action — including divorce.

Couples eager to invest in a second home but worried that the government’s buying restrictions might lock them out opted for a pre-emptive strike by filing for divorce so that each ex-spouse could buy an apartment.

The city government in Shenzhen said divorcees bought 45 percent of all new homes sold last year. And the number of divorce filings rose 46 percent to 20,000 in 2015 compared with the year before, the city said.

The divorce-property purchase link was even clearer in Shanghai during the last week of August, when the city’s marriage registration offices were overwhelmed with couples filing for divorce. The flurry followed reports on the internet that city officials seeking to prevent a property market bubble were planning to toughen rules for home-shopping divorcees.

Some couples divorced simply to avoid having to pay a larger down payment for a second piece of property. Currently, a Shanghai family buying a second home must make a down payment of at least 50 percent. The basic rate for a first-time home buyer is 30 percent.

Shanghai officials on Aug. 29 denied reports that the city planned to extend the higher down-payment requirement to anyone who is single but had been granted a divorced less than a year earlier.

But the official denial did not stem the divorce tide. The next day, for example, at least 108 couples in the city’s Jingan district filed to have their marriages dissolved. The district usually handles fewer than 10 divorce applications per day, according to a government employee who asked not to be named.

On Aug. 30, people waiting for divorce registration services at a government office in Shanghai told Caixin they thought the government would clamp down on home buyers and had thus decided to end their marriages.

Meanwhile, mortgage lending by China’s banks doubled to 2.36 trillion yuan in the first half of this year compared to 1.1 trillion yuan during the same period in 2015, according to the central bank. Almost all of the 4,636 new loans issued to individuals in the month of July were mortgages.

Behind the mortgage frenzy is a banker search for safety. Mortgages for home buyers in large and medium-sized cities are considered a much better bet than other types of lending.

Several bank officials who asked not to be named told Caixin their banks could make money on a mortgage loan unless the home’s value were to fall by more than 40 percent, which they consider unlikely.

Investors have also taken out other types of personal loans from banks to pay for property purchases, according to a state bank risk control officer who asked to remain anonymous.

Between Jan. 1 and Aug. 29, according to market data provider Wind Info, property companies had issued 889 bonds and raised more than 800 billion yuan. That compared with 675 billion yuan raised from bond issues for all of last year.

A plot of Shanghai land sold to the Fujian-based property developer Ronshine China Holdings for 11 billion yuan was one for the record books. Ronshine outbid rival developers at the city government auction on Aug. 17 by agreeing to pay about 100,000 yuan per square meter.

The Ronshine deal was one of hundreds of record-breaking land sales posted since January.

As of late June, according to state media, 205 deals each worth more than 1 billion yuan set new price-per-square-meter records in cities nationwide. Record-breaking feats were also accomplished in 2013 and 2009, but this year’s deals topped them all.

The nation’s largest developer by sales China Vanke said the total size of land sold for residential development in 14 major cities, including Beijing, Shanghai and Shenzhen, increased 47.5 percent in the first half of this year from a year earlier.

China Vanke, Country Garden Holdings and other major developers have been cautious about land buying of late in face of surging auction prices. But throwing caution to the wind have been state-owned companies and Fujian developers who have been dubbed the “land kings” of the latest market spike.

A Fujian property executive who asked not to be identified told Caixin his company “is actively looking for land with abundant cash in hand.” The firm “is not short of money but short of land,” he said.

However, some communities have been left behind, a fact underscored by a widening gap separating the real estate markets in China’s large and small cities.

An Aug. 31 report by the index academy said relatively wealthy cities in the Yangtze River Delta, Pearl River Delta and the Bohai Sea region have seen housing price rise more rapidly than their counterparts in other parts of the country.

But in most small cities, commonly referred to as third-tier and fourth-tier cities, home prices have been falling.

For example, the average home price in Nanning, the capital of the Guangxi Zhuang autonomous region, declined 3.8 percent in July year-on-year.

Many small cities currently have large inventories of unsold apartments. E-House China R&D Institute said that as of late 2015, many of these cities were sitting on more than two years’ worth of inventory.