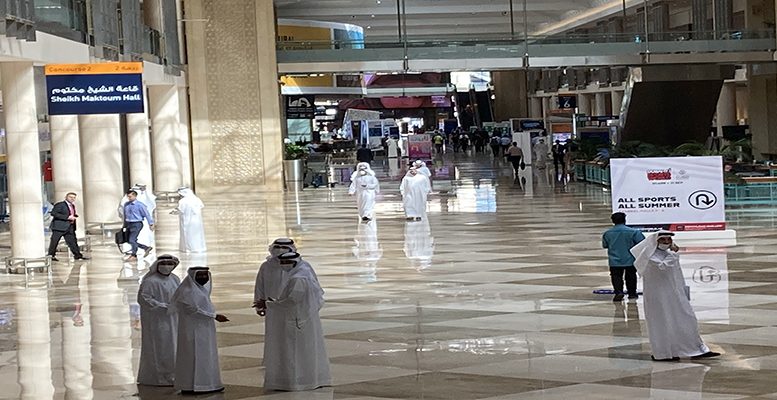 By Juan Girón Roger ( journalist). Text and pictures | The trade show for Arabic travel and tourism, the Arab version of Fitur, started in Dubai in May 9 and will continue on virtual format until May 19. Recovery, the role of technology for a renewal of travel and personalization for the traveler experience were the buzzwords there. They have what it takes –spectacular projects and huge budgets to make them happen.

Here’s some evidence of it: the contribution of the travel and tourism industry from the Gulf Cooperation Council (GCC) countries to the GDP of the Middle East is expected to go up to over US$ 486 billion by 2030. Hotel construction contracts awarded in the GCC are up by 16% during the current year and consultants from Colliers International evaluate those contracts in more than US$ 4.5 billion.

Dubai, the economic capital city of United Arab Emirates, launched its Tourism Vision 2020 plan in 2012, by which they intended to increase the tourists’ arrival by 20 million every year. They didn’t count on the pandemic then.

Anyway, Dubai boasted to be the most popular destination in the world, according to Trip Advisor (in 2019 it was visited by 15 million travelers). Its modernity and acceptance of Western habits, its huge malls, its extended Expo 2020 (this attracted 24 million visits in just 6 months), its towering wonder (Burj Khalifa), its disruptive architecture in the new ring-shaped Museum of the Future, and Ain Dubai ( “the eye of Dubai”), the world’s largest observation wheel, might be behind that customer rating.

But becoming the preferred travel destination in the region is a highly disputed prize. UAE (Dubai and Abu Dhabi) , Qatar (Doha), and Saudi Arabia are the big contenders here, while the neighboring  Sultanate of Oman (home of a bunch of UNESCO-listed sites) seems to shy away from massive visits that might risk to turn into over-tourism.

Qatar looks a bit like the black sheep in the GCC, the Gulf superpowers (Kingdom of Bahrain, State of Kuwait, Sultanate of Oman, State of Qatar, Kingdom of Saudi Arabia and United Arab Emirates).

Doha’s alleged support to Iran and some revolutionary causes (Al Ekhwan Al Muslimin -Muslim Brotherhood-, Al Qaida and others ) damaging Saudi interests  resulted in a blockade by its neighboring countries in June 2017, when a coalition led by Saudi Arabia (with UAE, Bahrain and Egypt ) stopped diplomatic relationships with Doha, banned Qatari planes and  ships from both their airspace and their sea routes and cut off bidirectional access through the Saudi land roads, the only existing ones to get in or out of the country by ground transportation. To lift this ban, the Saudi coalition demanded Qatar to minimize its relationships with Iran, to close Al Yazeera (a TV channel allegedly supporting terrorist groups and usually depicting as idolatry the UAE policies of religious tolerance) and to stop its military collaboration with Turkey. Nothing of that was granted by the Qatari rulers, but in January 2021, Saudi Arabia, through the intermediation of Kuwait and the US, reopened its borders with Qatar and started a reconciliation phase. The GCC announced the resolution of the crisis in a summit at Al ‘Ula, an area that Saudi Arabia wanted to promote for international tourism. The crisis was over, but its neighbors continue to take a dim view of Qatar. Main governments in that part of the world don’t get along with each other either and they tend to see rivals, not partners, among the other members of the GCC. This way they honor the old Arab proverb, “Arabs can only agree on one thing:  to always disagree with each other”.  And that leads unavoidably to the creation of factions.

In the fight to become the Gulf winner in this international visitors contest, Qatar owns Al Yazeera TV and can use it to attract tourists. Additionally, they sponsor the Barcelona Football Club, which generates some notoriety, and they host the 2022 World Cup of Football, for which the Federation Internationale de Football Association (FIFA) says 17 million future visitors have already requested tickets. FIFA expects to achieve US$500 million for tickets and accommodation packages sold.  Qatar will try to leverage all this, together with local assets such Al Zubarath Fort, also recognized by UNESCO as world heritage site.

Saudi Arabia is the largest nation at the GCC.The Kingdom is proud of owning the 20% of the world’s identified oil reserves and knows that money talks. According to BNC Network, Saudi and Emirati projects represented some 90% of all regional hospitality contracts awarded last year. Their rulers have launched the Vision 2030 plan and they expect to have 100 million visitors in 2030.

The authorities are not sparing resources – some US$ 800 million- to modernize everything and create new infrastructures. In order to achieve that goal, the society is opening up, things like the Mutawa -voluntary agents in plain clothes serving as religion police on the look for traces of immorality on things that people was doing or saying in the streets- is almost no longer used and Saudis are trying to accept foreigners. The saying “Tarsh al Baher” (“vomit from the sea”) used by traditional Saudi to refer to non-Saudi people arriving to the Kingdom in search of work in the old days and to whom Saudi passports were given, and more extensively to depict non “pure” Saudi visitors, outsiders, immigrants (even from Arab countries) will have to be locked up in the closet and its key thrown to the sea.

Prince Mohammed bin Salman is looking for transforming the country in a land of moderate Islam (whereas Wahhabism is a very strict branch of Islam): women are allowed to smoke in the street now, although other ancestral traditions remain. Public beheadings, stoning, crucifixion or firing squads continue to happen on Saturdays at some public squares in Riyadh and Jeddah. In March, the UN denounced the mass beheading of 81 people in one day for various crimes including robbery, murder and terrorism. To say the least, this is not a very attractive feature for attracting tourists (unless they seek “extreme tourism” such as excursions to wars or visits to Chernobyl’s still contaminated nuclear sites).

Neom, the future is almost now

Arabia used to demand a letter from a sponsoring host company to receive you there for a business trip, now there is an online tourist visa system available for nationals from 49 countries, and the Kingdom is incentivizing travel agencies to dispatch to the KSA (Kingdom of Saudi Arabia) visitors galore.

Their programs include the Red Sea -previously only exploited by Egypt -through the Saudi Red Sea Development Company, an organization that is building luxury residences, hotels, golf courses, and marinas for Saudi and other GCC citizens to buy properties there. Between 2023 and 2024 this project and the one for the land and property project in that area, Amalaa (“hope”) will start to be a reality. By 2030, Neom, the Saudi super city in the Red Sea, made up of 90 islands -whose cost reaches some US$500 billion-, is expected to attract millions of visitors and host 2 million of inhabitants (“neomians”) with tourism attractions, ski slopes, routes just for mountain bikes since it will be considered a car-free city. This will also be a real smart city in the middle of the desert, north of the Red Sea, east of Egypt and south of Jordan. There are already 2,000 “neomians” living already there, and also there are 10,000 workers. They are planning to have flying taxis and don’t discard that alcohol can be sold within that city so that foreigners feel like home there. The city will be open to all in 2026 and the organizers consider that from now until then, there will be monthly contracts to providers of 1 to 1.5 billion riyals.

By 2030, the Saudi Red Sea might be a luxurious spot, with the fourth largest barrier of coral reef, 50 resorts, 1,000 residential properties and 22 islands, luxury marinas, an international airport, championship golf courses and many more. It also will contribute to the Saudi GDP with US$ 5 billion every year whilst cumulative revenues of US$ 123 billion coming from the construction and operations are expected by 2044.

Religious travel doesn’t fall out of Vision 2030. For that year, the authorities expect to see the number of Hajj and Umrah pilgrims grow from 19 million in 2017 to 30 million.

Saudi Arabia has currently six UNESCO World Heritage sites and 10 more await the final decision to be incorporated. Home to the Nabatean kingdoms, the country competes now with Jordan’s Petra. Hidden in the north-west canyons, in the middle of the desert, Al ‘Ula, dubbed “the world masterpiece” and “the second Petra”, is one of the oldest cities in Arabia (some 7,000 years of history). In this area we found Hera, their first UNESCO-recognized site. They don’t want mass tourism there and the destination had 130,000 visitors last year. Another area Saudi tourism is promoting is Al Ahsa, an oasis in the east of the country, with over 2.5 million date trees, stretching into the Rub’ Al Kali. In the south-west, Al Baha offers 1,001 stone qashbah (“fortress”) lookout towers as well as a convenient access to the marble village of Dhee Ayn.

In parallel, Riyadh plans to invest US$ 64 billion in culture, leisure and entertainment projects through the coming decade. Saudis are aware that to secure a sustainable travel industry in the long term, elements such as innovation, respect for the environment, talent and traveler personalization are the necessary ingredients for a recipe of success. Meanwhile, Egyptian and Jordanian travel authorities will have to get it together and replace investments with inspiration.