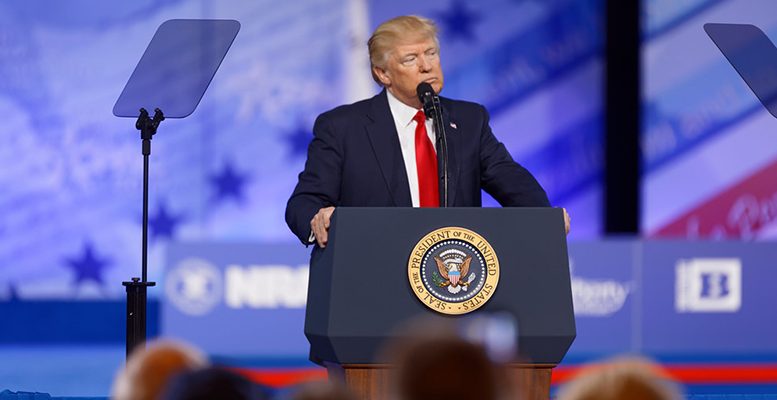 Donald Trump has two tools at his disposal as president. The first is his mouth: the insults and threats that he issues verbally or by Twitter. The second is the tariff. President Trump has imposed trade restrictions left and right, on allies and adversaries, for economic and political reasons, as part of a long-term offensive and out of short-term pique.

If Trump could use tariffs even more indiscriminately, no doubt he would. He would delight in slapping trade penalties on the Democratic Party, on Robert Mueller, on the mainstream media, on all the women who have accused him of harassment, even on the first lady for slapping away his hand at the airport in Tel Aviv.

Trump the man favored the legal suit as his attack of first resort; Trump the president has discovered the tariff. With his penchant for naming names, Trump calls himself “Tariff Man,” as if boasting of a new superhero power. It’s all-too-reminiscent of the cult film Mystery Men where the superpowers are either invisible or risible (Ben Stiller’s character, Mr. Furious, for instance, gets really, really angry).

Trump uses tariffs like a bad cook uses salt. It covers up his lack of preparation, the poor quality of his ingredients, the blandness of his imagination. It’s the only spice in his spice rack.

The latest over-salted dish to come out of the White House kitchen is the president’s threat to impose a 5% tariff on all Mexican goods on June 10. The threat has nothing to do with what Mexico has done economically (that’s a different set of threatened tariffs). Rather, it’s all about immigration. This time, Trump will keep inflating the cost of Mexican goods “until such time as illegal migrants coming through Mexico, and into our Country, STOP.” The tariffs will, supposedly, rise 5% every month until they reach 25% in October.

Trump promised as a candidate that Mexico would pay for the wall he wanted to construct along the southern border. Now, it seems, Mexico will pay for the lack of a wall as well.

The escalation is quite clear. What Mexico has to do to avoid these tariffs is not. “So, there’s no specific target, there’s no specific percent, but things have to get better,” Chief of Staff Mick Mulvaney told Fox News Sunday. “They have to get dramatically better and they have to get better quickly.” Such is the usual Sunday morning quarterbacking that happens with White House officials as they scramble to explain the inexplicable to a baffled news media.

Although they remain in the dark about what’s expected of them, Mexican leaders have warned that they will apply counter-tariffs if necessary and that the United States will suffer economically from such a tariff war. These are not idle threats. Mexico is the third largest US trading partner. Even congressional Republicans, desperate to avoid this spat, are talking about trying to block the tariffs. Trump has called them “foolish” to do so. He plans to move forward anyway.

Mexico is only the latest country to feel the wrath of Tariff Man. In 2018, Trump used Section 201 of the Trade Act to impose tariffs on solar cells and washing machines, targeting primarily East Asian countries. Shortly thereafter, he upped his game by assessing a 25% tariff on all steel imports, with Canada, Mexico and the European Union getting hit the hardest.

The escalation tactics don’t seem to have done much to improve the prospects of a trade deal between the two countries. China has naturally countered with its own tariffs.

When Trump lashed out against countries competing against the US steel industry, one of the major exceptions was Australia. That probably won’t last long. Just before his Mexico decision, the president was planning on imposing a tariff on Australian aluminum as well. His advisers managed to dissuade him, at least temporarily. Canada and Mexico, meanwhile, continue to get a pass on the steel tariffs as long as the two countries sign a replacement deal for the North American Free Trade Agreement (NAFTA). But Trump’s latest move against Mexico may throw that pending agreement into jeopardy.

The threat and even the reality of retaliatory tariffs seem to have little effect on Trump. He likes such geopolitical games of chicken. Congressional opposition only whets his appetite for more confrontation, for he holds even his Republican allies in contempt.

He disregards the more level-headed advice of economic mandarins — as well as seven former ambassadors to Mexico — because he relishes flouting conventional wisdom in favor of his own unconventional stupidity. If farmers in swing states protest that the markets for their soybeans have dried up, Trump will just authorize another massive government purchase of their product — and suddenly prisoners all over America will be surprised by tofu and edamame on their cafeteria menus.

Republican voters overwhelmingly support Trump’s trade policies — and the president really doesn’t care a fig about anyone else. The only pushback that might have some influence with Trump might be the business community. The auto sector is forecasting billions of dollars in costs associated with the Mexico tariffs. The Chamber of Commerce, which has come up with a more precise annual price tag for US consumers of $17.3 billion for a tariff level of 5%, is considering a legal challenge.

If the stock market goes into bearish hibernation, then the president is out of luck. Ian Shepherdson, the chief economist at Pantheon Macroeconomics, tweeted: “[H]e’s going to have to blink on tariffs, because the market can’t live with this level of crazy.”

Shepherdson is wrong. The market has lived with this kind of crazy for more than two years. And there are plenty of people who see profit in precisely the kind of volatility that Trump has brought to financial markets. When Trump went on a fundraising tour of New York recently, some big-name financiers leapt at the opportunity to fete the president. Howard Lutnick, the head of Cantor Fitzgerald, predicted in 2017 that Trump would provide a big bump for the world of finance (and, therefore, his own bottom line). Last month, as a reward for that bump, Lutnick invited Trump to his triplex penthouse in Manhattan and raised over $5 million toward his reelection.

That’s the kind of crazy that the market is entirely comfortable with.

Tariffs can also protect a way of life — Japanese rice culture, Mexican tortilla makers, Vermont dairy farmers. Without some kind of trade protection, cheaper goods from outside will completely overwhelm domestic producers and destroy long-standing traditions. Of course, there are other methods of preserving such traditions, from government price supports to geographical designations (think: champagne).

Trump’s tariffs have nothing to do with either of these aims. US steel is not an infant industry in need of protection. Trump doesn’t care about protecting traditional lifestyles. He has neither a progressive industrial policy of picking winners and losers in the economy, nor a conservative approach to ensuring the integrity of communities.

For Donald Trump, tariffs are a substitute for diplomacy, just as harassment in his personal life is a substitute for normal human interaction. Tariff Man can think of only one way of dealing with other countries: grabbing them by their trade policies until they squeal. He believes, mistakenly, that trade is zero-sum (if they lose, America wins). He also labors under the misconception that the US Treasury somehow grows fat with the proceeds of tariffs (it doesn’t). He is as ignorant of the relations among nations as he is of the relations among people.

Tariff Man’s superpower is even more ridiculous than that of Mr. Furious. It’s worse than impotent. It’s self-defeating. Let’s hope that principle applies ultimately to the 2020 elections as well.

*[This article was originally published by FPIF.]

Photo by Michael Vadon on Foter.com / CC BY