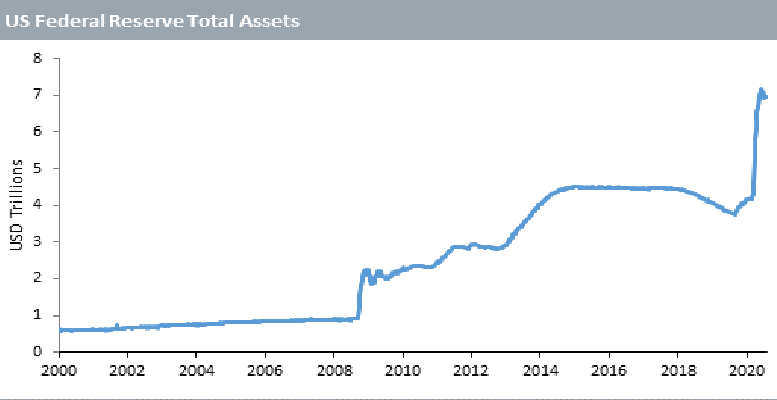 Mobeen Tahir, Associate Director, Research, WisdomTree | The US Federal Reserve (Fed) released detailed minutes on Wednesday, August 19, from its meetings held over 28-29 July. While there were no surprising shifts in policy, it appears that managing market expectations has become an unwritten acquired mandate of the Fed – given how increasingly integral monetary policy support has become to the wellbeing of asset markets.

What the Fed said

The Fed reiterated its commitment to employ all necessary tools to support the US economy. The key observations made by the Fed are as follows:

The target rate of the federal funds rate will be kept at 0 to 0.25% Economic conditions have improved in recent months, but meaningful hardship still persists The course of the virus is still uncertain and poses considerable risks to the outlook Policy will be determined based on how labor market and inflation conditions evolve The flow of credit to households and businesses will be maintained broadly at the current pace

Notably missing from the Fed’s minutes was explicit guidance on additional unconventional monetary stimulus. The central bank also did not veer into ‘yield curve control’ territory – a tool which would effectively put a cap on treasury yields. At WisdomTree, our assessment of the impact of Fed’s policy on asset markets is as follows:

The biggest challenge facing the Fed in the coming months (and years) is to sketch a roadmap for closing the floodgates of liquidity. At this point in time, it might seem like a ‘nice problem to have’. But given long and variable lags between policy implementation and impact on economy, these are issues the Fed needs to be thinking about now. While the Fed’s mandate is to promote maximum employment and ensure price stability, markets have become highly dependent on central bank accommodation as a propellant. As unemployment (currently 10.2% in the US) decreases and inflation (US Core Personal Consumption Expenditure Index inflation is currently 0.9%) rises closer to the Fed’s desired target level of 2%, the central bank will need to tighten policy.

The key risk in the above scenario is markets being spooked unnecessarily – remember the ‘taper tantrum’ of 2013 when panic ensued in markets as the Fed announced it was putting breaks on its quantitative easing program? The best way for the Fed to avoid such an outcome is to manage market expectations with carefully articulated forward guidance. If markets – rather than economics – dictate monetary policy, the Fed’s ability to control inflation may be undermined in coming years. Strategic investors holding inflation hedges such as gold and broad commodities would be well-positioned in such a scenario where US inflation may exceed beyond the Fed’s desired 2% target.