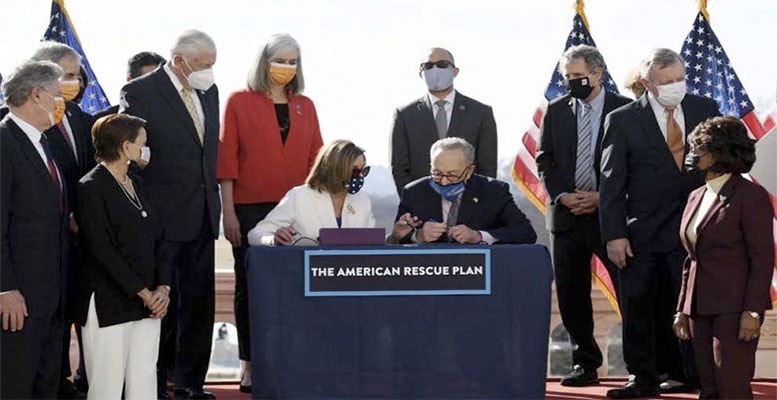 Bryan Keogh via The Conversation| The U.S. economy and millions of people struggling because of the pandemic are about to get a US$1.9 trillion jolt of stimulating relief.

On March 10, the House of Representatives approved a version of President Joe Biden’s coronavirus package that barely squeezed through the Senate. Both votes were almost entirely along party lines. Biden signed the bill into law on March 11.

The legislation includes $1,400 relief checks for most Americans, an extension of the $300 supplement for the unemployed, a more generous child tax credit and much more. We turned to our archive to provide some context on this historic legislation.

Among the signature – and most popular – features of the package are the $1,400 payments most Americans will soon receive.

There was some wrangling in the Senate about what the level of income at which to phase out the payments, and ultimately the threshold was lowered from what it was for earlier rounds of relief checks so they’re more targeted at lower incomes – $80,000 for singles and $160,000 for couples. But even so, the checks make little economic sense, argue Monmouth economists Robert H. Scott III and Kenneth Mitchell.

“Research conducted on the first round of checks found that the vast majority of Americans saved most of the money or used it to pay down debt,” they write. “We believe President Biden’s COVID-19 relief bill gets a lot right. … Sending one-off $1,400 checks to people experiencing no economic hardship during the pandemic is not among them.”

One of the other heated debates over the legislation has been whether it will overheat the economy by providing too much stimulus. The White House, on the other hand, explicitly refers to it as a “rescue.”

Whether you call this big pot of money a relief or a stimulus package is more than just a question of semantics, because it reflects what is actually ailing the U.S. economy and what course of medicine the nation needs, writes William Hauk, an economist at the University of South Carolina.

Hauk examines what kind of crisis we’re in now and whether the $1.9 trillion is the right remedy.

They conducted a survey in 2020 after Congress passed the first major coronavirus package and spent a record $2.2 trillion trying to support an economy in free fall at the time. They found that the vast majority of people affected by the pandemic were still suffering despite the $1,200 checks that were sent out and the supplemental unemployment insurance.

“Our findings suggest there is a definite need for further government aid on a large scale for tens of millions of families,” they write. “The pandemic has been an economic disaster for some – particularly low-income and Black and Latino households – more than others. They still need a lifeboat to get them through the storm.”

Despite the apparent need and the measure’s high popularity in surveys, it passed the Senate by the barest of majorities – 50 to 49 – and Biden’s victory was possible only because of a little thing called “budget reconciliation.”

Congress invented reconciliation in 1974 to reduce budget deficits, but more recently lawmakers have used the process to get around the usual 60-vote requirement for major legislation. For example, Republicans used the process in 2001, 2003 and 2017 to pass tax cuts, all of which actually increased the deficit, explains Raymond Scheppach, a public policy professor at University of Virginia.

“Perhaps the most significant negative effect is that it has reduced the rights of the minority party to shape legislation, which often leads to more extreme policies,” he said. “Passing legislation through reconciliation, I believe, exacerbates voter frustration and weakens democracy.”