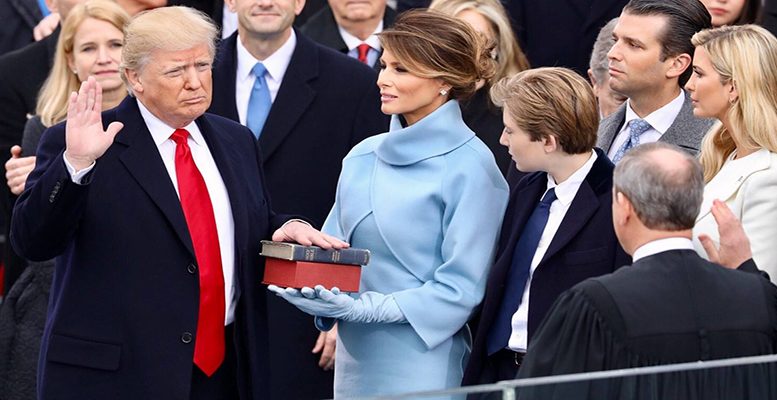 Donald Trump started his mandate with a speech which gave a glimpse of worrying issues. Amongst the points to be highlighted are his promises of increased protectionism against imports, a harder stance against immigration and a huge dose of populism. For Donald’s kind of populism.

Trump’s plan is utopian. Give back to the Americans – victims of globalisation – what this has taken away from. As I have already said, this is impossible. That has gone for ever. Those industries which died because of globalisation will never recover and even less with import tariffs. On the other hand, the US is the king of new technologies, which Trump did not even mention in his speech. It seems that this is anecdotal for him.

Trying to rebuild an industry by risking the unique power of those companies which rule the world of technology is suicide. Because it’s obvious that if he goes too far with his protectionism against goods from other countries there will be retaliations. And these will hit the US’ cutting-edge industries.

There will be similar consequences if he tries to get domestic companies which have moved to other countries to return home, using the carrot (fiscal compensation) and stick (fiscal sanctions) approach, according to whether or not they agree to reinstall themselves in their native land.

All this sounds very worrying for the rest of the world. As there are other anti-globalisation processes already underway (Brexit-EU battle), the result may be really traumatic for whoever gets caught in the hailstorm. But what is inevitable is that GDP will shrink. Less GDP, more global unemployment.

Another of Trump’s star promises convinces me more: spending public money to refurbish deteriorated and abandoned infrastructure. It’s strange that the republicans are now coming out with this, when they were flatly refused to do it during Obama’s mandate. But as you see, politics are equally cynical wherever you go. Can the combination of increased public deficit, more taxes on imports and a tax cut for companies go a long way…? In my opinion, all this combined should fuel an increase in domestic demand, which will boost the demand for imports (the normal thing is that increased demand prevails over the rise in import taxes), which will bear the brunt of more taxes: this will increase inflation, due to the higher internal cost of the imports which will be passed on to internal prices.

And this is where the Fed’s response comes in: when this inflationary pressure exceeds certain limits, with or without a reaction from the Fed, interest rates will go up. It remains to be seen how public debt will be affected by the net sum of tax cuts plus increased public investment, with higher interest costs, but sooner or later the alarm bells will ring. That said, the republicans control both houses, so there will be more tolerance for debt.

In short, Trump is promising two incompatible things. Increasing demand, while cutting the external deficit, complicated by an aggressive protectionism plan aimed at certain countries, which will encourage more protectionism as a response. A complex sudoku with implications over time which are not easy to predict. There will be an initial boost for the global economy, but this might begin to fade as the trade war heats up.

So how far will this threat go? It must be said that Trump is not right, but he is right to point the finger at the Chinese (and other countries in the region), whose trade policies have been piracy. The Chinese have to rectify their economic framework now that it’s a world power. But Trump should not start a war with everyone on his own. He should know who his allies are, and up to now there is the UK, on the brink of breaking away from the EU and, apparently, Russia. It’s not advisable to issue threats ahead of time, and that is what he has done up to now. And Friday’s inauguration speech did nothing to contradict this…Threatening, challenging and populist. And, unfortunately, fuelling populism in other places in the world.