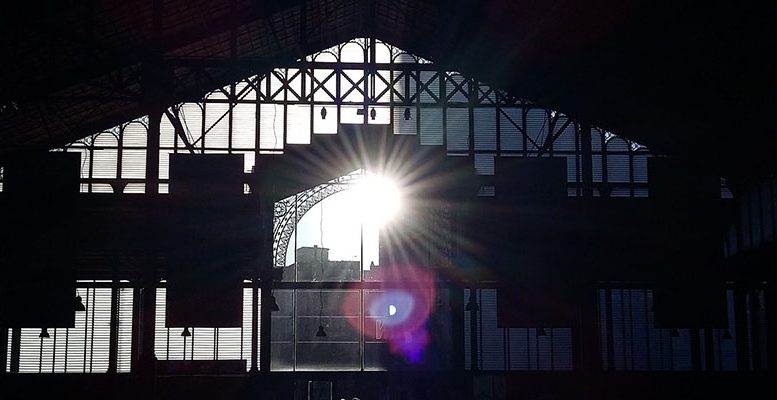 Since 2008, pessimism has had a landslide victory over optimism in the human mind. It’s a fact which doesn’t need to be demonstrated, at least when we are talking about “how things are going with the economy.” The Bond Vigilantes dare to challenge this unstoppable current of pessimism – and not only with regard to the economy – with an article based on the Internet’s contribution to global well-being. As a counterpoint, here is Larry Summers’ vision, with a few notes here and there from Robert J. Gordon.

The first one says Internet is precisely the long-term problem for global employment. So let’s start with Larry Summers, who in 2013 presented his theory of “Secular Stagnation”, which had a significant impact, and of which he offers us a recent example in the afore-mentioned article. The graphic – which he takes from Eberstadt – provides a clear summary of his view:

The curved line is the number of men in the US between 25 and 54 years of age who are out of work. The straight line is the trend defined linearly. From 1967 until today, there are more and more men of these ages finding less work. If this trend is maintained, 25% of the population will not have a job in 2051.

But Summers is much more pessimistic. He believes the trend will be exponential, even much more acute, and that the percentage out of work could reach over 30%. There are various reasons, like the disappearance of certain jobs which have not been replaced by others, like drivers.

It’s strange that Summers dares to place himself on the side of the discredited “Luddites”, these famous British working men from the XIX century who destroyed agricultural machinery because it took jobs away from manual labourers. It’s obvious that machinery led to a huge increase in productivity, definitively increasing the available supply. Summers himself acknowledges this, but alleges that if the Luddites were wrong, given that innovative machinery effectively does bring with it huge advances in productivity, then why are we not seeing this today? Why is investment not increasing when it can be so productive?

Here this clearly ties in with Robert J. Gordon’s theory that Internet’s contributions to productivity are over. And they have not had the same massive influence as those big inventions at the end-XIX- beginning XX century, like electricity, the telephone or the railway. These fuelled expansion and incessant growth in productivity for decades, constantly creating jobs. But after a few years, Internet has directly benefited the consumer.

Summers doesn’t just look at what is conditioning supply, but also says the lack of demand is a result of this pessimistic view. If productivity doesn’t increase with Internet, if salaries don’t rise despite the fact that the unemployment rate is at minimum levels, there is something wrong: it’s not all down to supply.

It’s always been considered that the problems of demand were temporary and those of supply more long-term. The original thing about Summers is that in his “Secular Stagnation”, which has its roots in Keynes, it’s clear that demand can be languishing for decades. Its radical break with the “Mainstream” is that there is a deficit of demand which can’t be sorted out, as the neokeynesians say, those main defenders of the theory that demand is a problem which can be solved with a little bit of monetary policy.

Summers differs radically here, and the truth is that he is winning support, even within the BIS. The banks have already done all they could, have used up their arsenal and need to rely on other forces, as its chief economist Claudio Borio said at the presentation of the BIS annual report.

Let’s now consider the optimistic view of Bond Vigilantes. They don’t beat about the bush, stating that the Internet is a limitless source of wealth which has helped emerging countries to grow. And it promises to contribute even more in the future, as can be seen in the graphic.

GDPs have been boosted, poverty has declined and employment has increased, although with more intensity in Asia than in LatAm.

This vision – or this proof – is clouded by the human mind’s tendency to be pessimisitic when it thinks and talks about collective problems, which are always stuck in its most inflammable corner.

Perhaps Internet is contributing more to the under-developed countries than to the developed world? Perhaps the trend oulined by Summers in the graphic above will not be exponential, but exactly the opposite? Pessimism is a natural tendency, that’s quite clear: but the truth is that the IMF is once again revising its outlook downwards and all the organisations have quitted in the fight against deflation. And let’s not forget that deflation greatly aggravates the problem of the debts which have not stopped growing.

What seems to be clear is that the problem of demand is a priority, but the need for urgent structural reforms is still being repeated like a mantra. We haven’t wanted to back down from the official Doxa that only supply problems are important, when what we would like now is to have problems of an excess of demand, of inflation, of recovering economies, in exchange for this state of pernicious anemia. It would be something of a dream to be able to discuss how to contain these excesses.