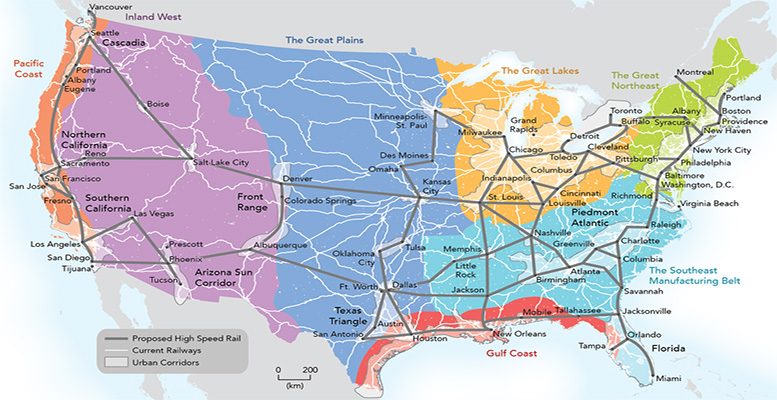 Matthew Penn via Atlantic Sentinel | The 2016 election was a turning point in American history. Cultural, political and regional differences have become so vast that the American political system is becoming unsustainable. There are two fundamentally different visions of what this country should be and the current federal system does not allow these differences to be reconciled.

For these reasons, I am proposing a new political system that would transform the United States of America into the United Republics of America.

This new government would still allow nationwide coordination of domestic and foreign policy, but it would devolve power to newly created republics.

I am not proposing a devolution of power to the states. Current state boundaries are wholly inadequate to solving the country’s political divisions. The republics need new borders.

Political scientist, journalists and urban planners have discussed the possibility of redrawing the political map of the United States.

Joel Garreau described the geographically distinct cultural regions of the United States in The Nine Nations of North America (1981). He named these regions Dixie, the Breadbasket, Ecotopia, the Empty Quarter, the Foundry, the Islands, Mexamerica, New England and Quebec.

Dante Chinni and James Gimpel described twelve distinct categories of communities in Our Patchwork Nation: The Surprising Truth About the “Real” America (2010). Their categories are not exclusive to one region. Each community type can be found in every region of the United States.

Josh Kron, a journalist, has discussed the emerging political divisions between rural and urban areas in The Atlantic. He writes that metropolitan areas are morphing into politically distinct “megaregions”: Cascadia in the Pacific Northwest; two megaregions in California around Los Angeles and San Francisco, respectively; the Arizona Sun Corridor; a Front Range Megaregion from Albuquerque to Denver; the Texas Triangle; a Gulf Coast agglomeration; a Great Lakes Megalopolis that includes Toronto; a Piedmont Atlantic Megaregion around Atlanta; the Northeast Megapolis, or the Boston-Washington Corridor; and the Florida Panhandle.

It’s not a coincidence that these same regions turn up blue (Democratic) on election maps whereas the rest of the country typically colors red (Republican).

Parag Khanna’s proposals on infrastructure development help tie the previous ideas together to create the political boundaries of a United Republics of America.

In Connectography: Mapping the Future of Global Civilization (2016), Khanna discusses the need for increased “connectivity” (coordination) between metropolitan areas. He points to a map by Clare Trainor, a graduate in cartography and geographic information systems from the University of Wisconsin-Madison, who has called for high-speed rail links between the same megaregions identified by Kron.

But simply redrawing state boundaries or tinkering with the relations between the federal government and the states is not enough.

Instead of certain powers being delegated to a new federal government and others being reserved for the republics, each republic could have its own political system and laws.

All Americans would be citizens of the United Republics of America, but each citizen would be a resident of only one republic. They would vote and participate in the political process of whichever republic they join. Republics would be required to ensure their residents’ rights under the Bill of Rights. Beyond that, they would have the freedom to give their residents more privileges and rights.

This system can be described as a mixture of the Articles of Confederation and the European Union, but it would still be a single, sovereign national system of government, not a supranational union.

The biggest challenge would be protecting the freedom of movement of citizens and goods while preserving each republic’s autonomy.

One solution would be a series of transit corridors. This could be an amalgam of the current highway system and the high-speed rail network proposed by Trainor. Each transit corridor would be neutral territory, like international waters. Thus while traveling to another republic, citizens could avoid jurisdictions and laws they find objectionable.

Given the divisiveness of presidential elections and the challenge a single ruler with a mandate from the entire nation could pose to the new order, the United Republics of America should be led by a Republican Council.

Like the German Bundesrat, it would be made up of representatives from each republic, including its leader. Its primary responsibilities would be maintaining and securing the transit corridors and protecting citizens’ rights and the security of the country as a whole.