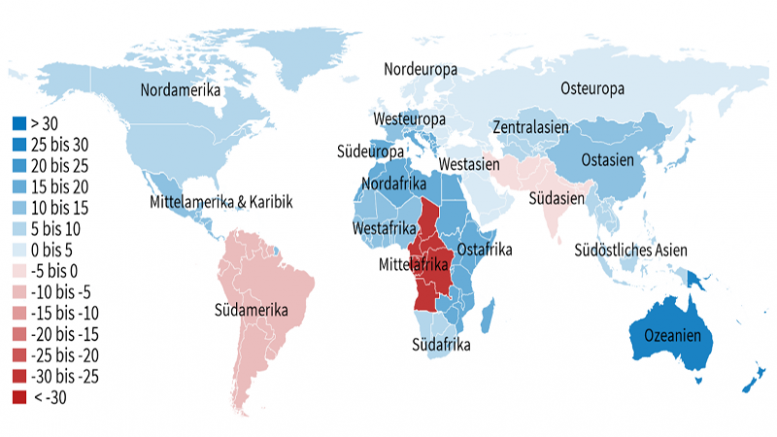 IFO Insitute | The assessment of the political situation improved worldwide in the second quarter of 2022 according to the latest Economic Experts Survey (EES) – a global quarterly survey conducted by the IFO Institute and the Swiss Economic Policy Institute – which this time had 1,795 participants from 127 countries. At plus 10 points, they assessed political stability worldwide as significantly better than in the previous quarter. “Despite energy and food crises, even worse fears from the war in Ukraine have fortunately failed to materialize,” says IFO researcher Niklas Potrafke. “At least the fighting has remained regional.” In 15 of the 18 regions considered, participants rated political stability as better than in the first quarter of 2022. Respondents from Western and Southern Europe in particular are more confident, rating political stability as 19 and 24 points better, respectively (on a scale of −100 to +100). By contrast, there is somewhat less satisfaction with government performance in Northern and Eastern Europe.

The political situation indicator is composed of the following categories: political stability and government performance. Data is first averaged at country level and then within 18 world regions.

Assessments of economic policy vary worldwide, especially when dealing with challenges in the future. As far as Europe is concerned, ratings are more negative in Eastern Europe but more positive in Western and Southern Europe when compared to the previous quarter. Assessments in the Americas are also divided: while participants from North America say that economic policy is coping better with upcoming challenges than in the previous quarter, South American respondents assess their governments’ economic policy as worse.

Please note: The map shows the mean of the regional average of two questions: “How do you rate the performance of your country’s current government?” and “How do you rate the stability of your country’s current political situation?”. The experts were asked for a comparison with the previous quarter; the response options range from −100 (“worse”) to +100 (“better”). The data is first averaged at country level and then within 18 world regions.