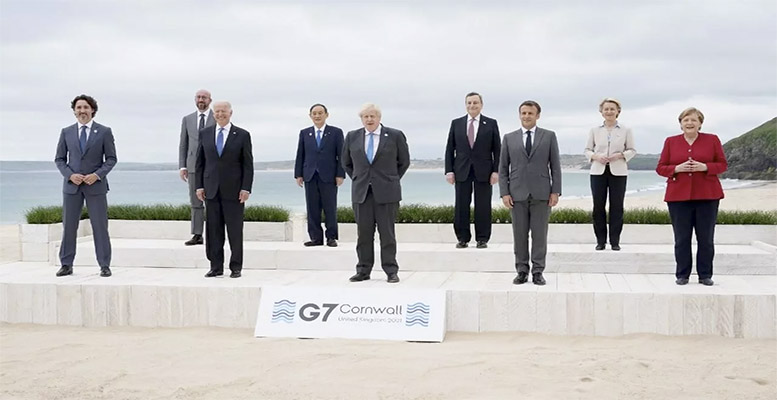 The G7 is united on China, climate change and pandemic. G7 leaders met this weekend for Joe Biden’s first summit as US president. Their first item on the agenda was to reach unity in relation to China, obtaining an agreement on a global infrastructure project (Build Back Better World) in response to China’s One Belt, One Road project, although without explicitly mentioning it in the text. In addition, the seven countries also committed to implement measures against anti-competitive practices by Chinese industry and agreed on a communiqué on human rights violations in Xianjing. The G7 also criticised China and demanded an investigation into the origin of COVID-19.

The G7 leaders criticised China over human rights in the Muslim-majority region of Xinjiang, called on Hong Kong to maintain a high degree of autonomy and stressed the importance of peace and stability across the Taiwan Strait, all highly sensitive issues for Beijing. That said, there were differences of approach amongst the leaders. For example, Biden flagged that the group agreed on the importance of uniting against autocratic regimes and defending human rights, and there was a statement that mentioned Xinjiang and the human rights problems in Hong Kong. For his part, Italian Prime Minister Mario Draghi said the G7 had to be honest about the differences between the West and China in his post-summit communiqué. Meanwhile, other leaders were much quieter on China. Chancellor Angela Merkel remains interested in working with China, especially on climate, and Prime Minister Boris Johnson did not mention it in his closing remarks either.

Hours later, China called the joint statement by the Group’s leaders a serious interference in the country’s internal affairs, and urged the group to stop defaming China.

On the pandemic, leaders pledged to donate 870 million vaccines to developing countries, half of which are to be distributed this year.

Climate change was another major issue addressed by the G7, which reached consensus on more ambitious targets. The seven agreed to end support for coal-fired power plants and to accelerate the transition to new electric vehicles. In the final communiqué, the countries pointed out that it is still possible to limit global warming to 1.5 degrees Celsius. On fiscal matters, the G7 pledged to continue stimulus programmes as long as necessary, and agreed to continue working on a global tax on multinationals of at least 15%, and that they will seek further agreement at the G20 finance ministers’ meeting in July. Finally, the communiqué emphasises the importance of restarting international travel and the commitment to end the pandemic by 2022.