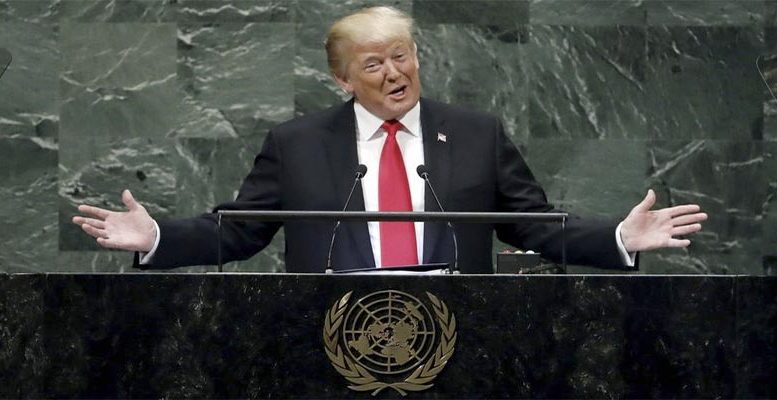 Ian McCredie | True to himself, US President Donald Trump completely failed to address any of the issues confronting the global community in his keynote speech to the 74th General Assembly of the United Nations. Instead, he used the platform to criticize China, to excoriate Iran, to boast of how big and dangerous the US military has become, and to urge every nation to close its borders to even the most hungry or persecuted migrants. He did, however, think it appropriate to support the right of all Americans to own as many guns as they want.

In the same speech, Trump made headlines with his words urging the world to hold China accountable for having “unleashed this plague on to the world,” in reference to the COVID-19 pandemic, and for deliberately encouraging the coronavirus to spread. The White House cut these words from the transcript posted on its website. Perhaps even the administration’s press office did not have the stomach to publish such libel.

This speech to the UN was a moment when the leader of the free world — as a US president might once have been seen — could actually attempt to lead. The speech was an opportunity to inspire and to set out a roadmap to a better future. Trump chose to do the reverse. The world is facing a triple crisis of an international pandemic, economic collapse and climate emergency. Trump could only reach out for people to blame: the Chinese, Iranians or Venezuelans. He failed to mention that the United States has the biggest coronavirus death toll of any country in the world, with over 200,000 dead and counting.

Nor did Trump comment on the millions out of work or that America’s west is burning at the same time that its southeast is inundated by hurricane after hurricane. These are not just America’s problems: Trump did not address the dire straits of billions of non-Americans impacted by these dangers. Why would he? This is the true measure of “America First.”

The American leadership vacuum is a grave danger to not just Americans but to us all. Trump’s failure to act early to stem coronavirus infections — a deliberate decision he made to fatuously “avoid panic” — will likely cost the lives of tens of thousands more Americans on top of the current staggering death toll. The US withdrawal from the World Health Organization in the middle of the pandemic signaled that Trump wanted no part of the international leadership out of the health crisis. The resultant deaths will be beyond imagination.

Trump has employed the same approach to international economics. His regime’s policy has been to withdraw from trade agreements, set up sanctions barriers against competitors and allies, and complain that everyone else’s industrial policies are more successful than his. Trump has also embarked on a determined effort to weaken the international institutions — the International Monetary Fund, the World Bank, the World Trade Organization and so on — that have enabled the world economy to prosper for the past 75 years. The world is going to need a great deal of leadership to emerge out of the current economic wasteland, on a scale of what was done to repair the damage of the Second World War. We can rely on Donald Trump to be absent from that role, too.

As for the climate emergency, Trump has chosen to deny it. More than that, he has proceeded to undo everything previous US governments and the international community had done to try to save the planet from disaster. All of these crises are going to produce millions of refugees across the world. Trump couldn’t care less.