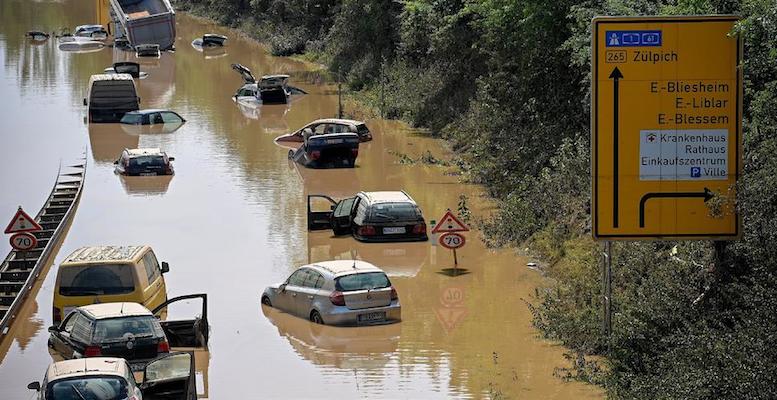 This week, awareness of climate change and its consequences hits harder than ever before thanks to COP26. And while European countries have arguably started to take climate considerations into account in their budgets, there is still a long way to go. Indeed, “economic losses from extreme weather events represent the number one natural disaster risk for countries across Europe,” says Alvise Lennkh, deputy director of sovereign ratings at Scope. He recalls that between 1980 and 2019, extreme weather events caused an estimated economic cost of 446 billion euros (3% of GDP in 2019) for the member countries of the European Environment Agency (EEA).

Here is an interesting analysis by the rating agency Scope on the costs and consequences of climate change for countries, their economies and their sovereign ratings, including Spain.

It is difficult to analyse trends in economic losses given that the incidence of bad weather and natural disasters such as forest fires vary hugely from year to year with most of economic losses concentrated in a few extreme events .Germany committed EUR 30bn to fund reconstruction efforts after the July 2021 floods that devastated parts of Western Europe while the Greek government announced EUR 500 to fund relief and compensation for people who have lost homes and property in this summer’s wildfires.The macroeconomic relevance of extreme climatic eventsfor EEA countries over 1980-2019 was limited, though it varied considerably across countries (see Appendix Ifor full overview). CEE countries such as Croatia, Romania, the Czech Republic, Bulgaria and Hungary were the most affected, with average annual economic losses from climate extremes over 1980-2019 ranging from 0.11% to 0.15% of GDP, well above the 0.07% EEA average (Figure 2).Overall, lower income countries tend to have suffered the highestcosts from severe climate events in the past (Figure 3).

Southern Europe is more exposed with the magnitude of overall welfare losses being several times higher than for northern countries, driven by droughts and coastal floods. Similarly, CEE countries also appear more exposed,but driven mostly by inland floods. These findings are similar to those highlighted in the ECB’s economy-wide climate stress test, which highlights that firms exposed to high physical risk are predominantly concentrated in the south of Europe.

Excluding the losses linked to increased mortality (for which estimates vary greatly depending on the assumption for the monetary value of life), the overall annual welfare loss would amount to 0.4% of GDP (Figure 5).More recently, the European Commission has estimated that GDP losses due to the negative effects of heat waves on human productivity will increasefive-fold from 0.2% on average over 1981-2010 to 1.14% in the 2060s.

Still, these estimates account only for the direct impact of changes in climate. Second-round effects that include the possible impact onsectors that arearguablymost vulnerable to physical risks such as fishing, forestry or tourism, arenot included.

While we do notestimate the risk of climate change on these sectors, we do note that Mediterranean economies are highly dependent on precisely those sectors that are most likely going to be affected by more extreme weather. The total contribution of agriculture, fishing, forestry and tourismto GDP stands at around 10% for Southern European countries versus 6% in Northern Europe, 5% in Central Europe South and 3% in Central Europe North (Figure 6).

Coastal tourism is particularly at risk given the disruptions associated with severe storms to transport, power and water supplies that the sector relies on. Similarly rising temperatures may result in shifts in tourist flows as climate conditions become more favourable in Northerncountries at the expense of Southern regions. Tourism activity could thusdecline in Southern Europe, adversely impacting these countries’ economic activities.

We note that, in an international context, Europeansovereigns generally score well on our physical risk metric. Natural disaster risks appear to affect mostly Asian, Latin American, African and Caribbean sovereigns while they remain, on average,more contained for European economies. In general, we find a clear correlation between the WRIand historic economic losses from extreme climate events though with some notable exceptions (Figure 7).For instance, the Netherlands(AAA/Stable), which has suffered relatively moderate economic losses over the last forty years(1.1% of 2019 GDP), is the most exposed country in Europe according to the WRI due to the substantial challenge posed by rising sea levels given that a quarter of the country rests below sea level.

While our ratings already incorporate a forward-looking assessment of natural risks that sovereigns face, the importance of such risks for sovereign creditworthiness will grow over time as extreme weather events become more frequent and severe. They are also likely to increasingly interact with other risk pillars as climate risks spill over intoeconomic and fiscal performance as well as financial stability. The pervasiveness of natural risk could thus lead to greater rating divergence given that thecountries which most exposed tonatural risks–such as Turkey (B/Negative), Greece (BB+/Stable), or Romania (BBB-/Stable)–tend to have lower ratings by Scope, except forthe Netherlands (Figure 8).

You can see the entire report here