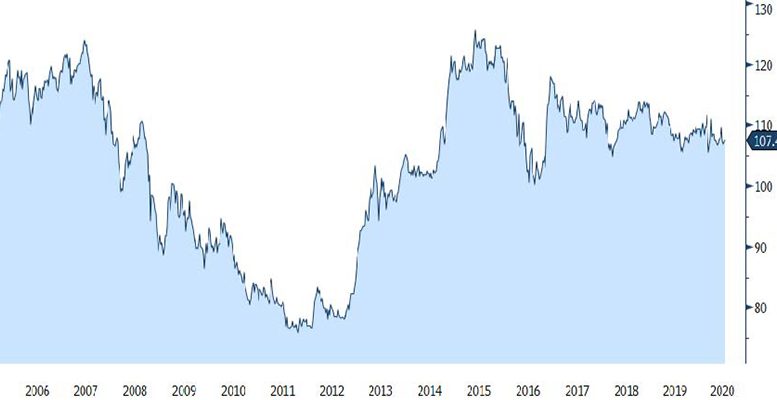 Olivia Álvarez (Monex Europe) | The USDJPY pair has remained broadly range – bound after central banks aggressively intervened to stabilise financial markets from the sharp moves triggered by the outbreak of the pandemic. The pair’s range during the onset of the virus widened to nearly 10% between the end of February and mid – March. USDJPY volatility has since subsided, with the range falling to a maximum of 3.5 % after April to date

The volatility in JPY is muted compared to the ranges the G 10 currencies have traded in against the dollar in the aftermath of the March shock, which sit around 9.6 % on average – excluding the yen. The Australian dollar and the Swiss franc’s ranges sit at extreme ends of 18.1% and 4.4% respectively. Compared to historical standards, the yen has also traded in a relatively narrow range with respect to other periods of major recession risks worldwide. Looking forward, we would expect the yen to continue trending to the upside against the dollar, while the trading ranges remain tight.

As per the sharp narrowing of the yield spread between Japanese and US bonds following the Fed’s aggressive policy easing stint, one would have expected JPY to gain ground against the greenback at a faster pace. The spread between Treasuries and JGBs 2- year yield is at its lowest level in almost a decade while the 10 – year gap is narrower than ever before. The front – loaded reduction of the yield differential makes a particular case for further JPY strength, especially since the dollar has broadly weakened against the G 10 currency board. However, shifting conditions in market sentiment along with markedly accommodative forward guidance by the BoJ and a bleak Japanese economic outlook keeps preventing the currency from lifting off