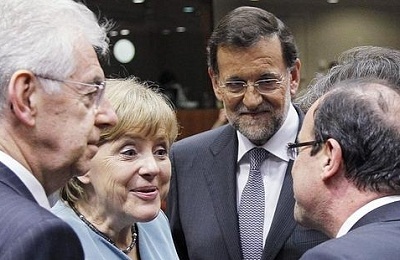 By Julia Pastor, in Madrid | Merkel, Hollande, Monti and Rajoy. Four names for another crucial meeting in the euro zone, the one held today at Rome to smooth the path of next June 28-29 Summit. Christine Lagarde will not participate in this conversation but her name will surely loom large in the four European leaders' minds. The International Monetary Fund’s managing director is raising the pressure for the European weak banks to be recapitalised directly, with no need of using national mechanisms, an idea which would be welcomed by France, Italy and Spain but which is so far rejected by a tough Germany.

The Spanish government has been defending this position since negotiations about the country’s banking sector began, quickly gaining the support of most of the European leaders. In fact, the Italian president Mario Monti said last Thursday he was in favour of helping the Spanish entities in a way that Madrid would not forced to require officially a bailout.

what to do to get back with my ex girlfriend

f a direct recapitalisation should be available in the short term, consequently hoping that

“wisdom will prevail” in order to approve what she considers as “the best solution.” This measure should be completed with a “creative monetary policy from the European Central Bank, as well as fiscal consolidation actions that do not focus on figures and enable countries' economies to grow.”

Waiting for the Rome meeting results and the IMF pressure effects, the Spanish minister of Economy Luis de Guindos has announced that Spain will oficially demand the credit line at the latest next Monday afternoon.

At 4 P.M, after the meeting closing, the German, French, Italian and Spanish presidents have jointly declared that the European Union will deploy 1% of its GDP, around €130 billion to a growth package. According to Mario Monti, “the goal is to reinforce growth and job creation.” However, even when the four leaders have committed to use all the necessary mechanisms to achieve financial stability in the euro area, Angela Merkel rejected again the idea of lending money directly to the banks on the grounds that the States would be the capital injection's guarantor. Now is up to the international pressure.