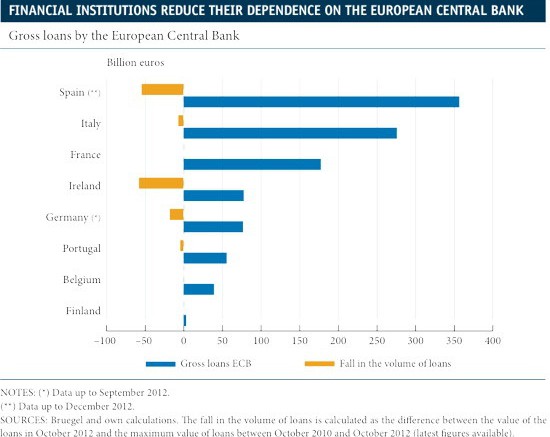 The persistence of the euro area crisis and its serious consequences for the credit situation, especially in the periphery countries, have led the Bank for International Settlements to relax the new banking regulation on liquidity. On 6 January, the Basel Committee on Banking Supervision announced a series of amendments to make banks’ liquidity requirements slightly more flexible. These new measures affect the liquidity coverage ratio (LCR) introduced in the new banking regulations known as Basel III. This ratio determines the amount of liquid assets banks must have on their balance sheet to ride out a withdrawal of assets for one month under a stress scenario.

These have been made more flexible via three different channels. The first is related to the schedule, as the period to implement the LCR has been extended from full implementation by 1 January 2015 to being partially carried out (60%) and progressively as from this date, with the deadline for full implementation now being 1 January 2019. Moreover, those countries with damaged banking systems will have complete flexibility in applying the LCR until they have exited the crisis. The second consists of broadening the definition of high quality liquid assets, allowing certain private debt securities to be included within this group. The third consists of relaxing cash outflow conditions for banks under a stress scenario. The aim of these measures is to avoid a «liquidity trap» that might arise in those countries with fragile banking system as a consequence of increasing liquidity requirements, something that would hinder economic recovery.

The data available so far confirm that private sector financing is still weak on the whole. Specifically, in November credit to non-financial firms fell by 1.4% year-on-year compared with the decline of 1.5 percentage points the previous month. This lack of dynamism is partly attributable to the deleveraging process firms are still carrying out. With regard to monetary aggregates, on demand deposits have seen 7.7% growth year-on-year, in line with their previous rates. For their part, negotiable instruments, which are the least liquid, have posted a notable drop of -3.6%. This slump is due to the fact that banks have not renewed their short-term debt amortizations, as they are replacing these sources of funding with other, more stable sources, such as deposits.

Banks’ sources of funding have yet to get back to normal and the ECB’s net loans to banks in the euro area are actually still high. However, these have fallen significantly throughout the euro area countries over the last few months. The graph above shows the amount of ECB funds held by different countries in October 2012, as well as the difference between these and the peak they have reached over the last two years. It can therefore be seen that the corrections carried out by countries are significant, especially among the periphery countries. Of note is the reduction made by Spain over the last few months, which has gone from 411.7 billion euros in August 2012 to 357.3 billion euros in December 2012, reducing its ECB loans by 54.3 billion euros. This adjustment is largely due to the reopening of international financing markets. In fact, this trend could accelerate over the coming months if financial institutions pay off their three-year long-term refinancing operations (LTROs) early.

In short, the future panorama for the euro area seems to be heading for calmer waters. The reduction in ECB net loans is, without doubt, a sign of the gradual normalization of financial markets and the banking sector.