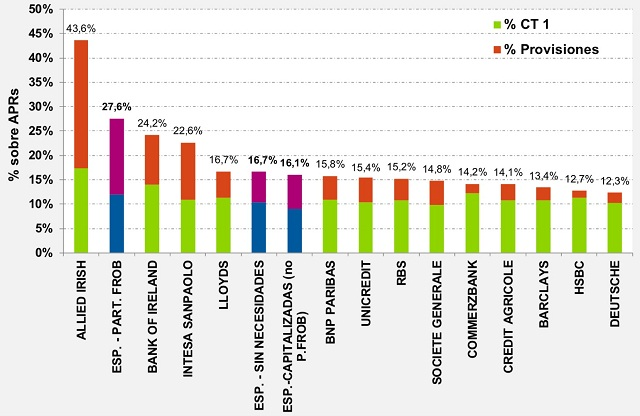 The first debt issue of an Irish bank since 2010 was met with a confident disposition by investors from core euro zone countries. Bank of Ireland sold this week €1 billion in covered bonds payable in 2015, with a risk premium of 270 basis points–which is lower than the spread of that type of securities when offered by Spanish banks–and €400 million were bought in Germany and Austria.

The window of market access opened in the last weeks to Spanish financial corporates seems to be breathing capital in to other peripheral countries, too.

Spanish banks have been able to place over €10 billion, so far. According to the Bank of Spain, Spanish entities cut their net credit line with the European Central bank in €36.6 billion in October, the total being €341 billion. Analysts at Afi said in a technical note that “this trend could signal the recovery of the short-term borrowing ability.” In fact, the accumulated fall in the banks’ dependency on ECB cash amounts to €47 billion since September, while most euro area banks have maintained their needs without changes.

The net financing euro zone banks have required from the central bank has reached €885 billion.

Yet, investors’ risk perception is increasing. The spread between German and Spanish 10-year bonds has again spiked to the 500 basis-point region and interest rates of some 5.9 percent. Although the European commissioner for the Economy Olli Rehn appeared to congratulate president Mariano Rajoy when expressed his belief that “Spain has taken effective action in restoring the sustainability of public finance. The box is ticked, as long as the implementation is solid and convincing,” Rehn also admitted that nominal and structural deficit targets would probably be missed.

The blame should be shared. The euro zone’s industrial production in September contracted by -2.3 percent year on year. The quarter recorded an average of -2.1 percent, slightly more moderate than the -2.6 percent in the second quarter of 2012. Market expectations point at a GDP fall of -0.7 percent.