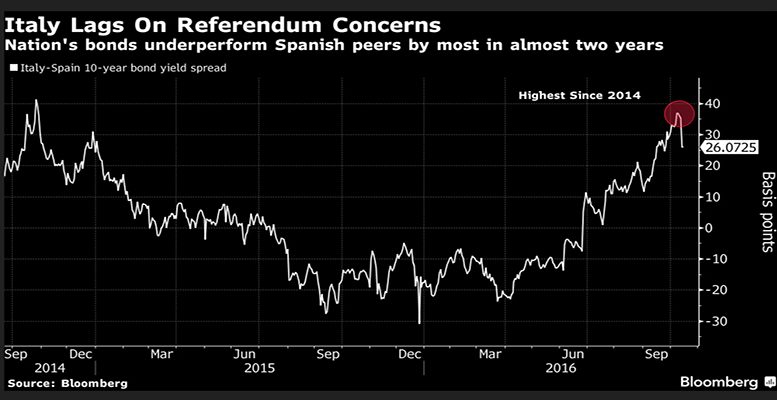 On December 4th, less than two months away, Italians will go to the polls in a binding referendum on a key constitutional change concerning job cuts and restructuring plans. If the referendum is rejected, the result could destabilise Matteo Renzi’s government in a country where the economy has contracted 2.1 percent since 2002. About a third of voters remain undecided, according to most polls.

All this turmoil is benefitting investors: underperformance is making Italy attractive, particularly as its risk is limited by the European Central Bank’s stimulus plan. The yield premium investors demand to hold 10-year securities versus similar Spanish debt soared to its highest closing level in almost two years this month, Bloomberg published on Monday.

The extra yield investors demand for holding Italian 10-year securities over similar-maturity Spanish bonds was at 0.25 percentage points on Friday Oct 14th, down from 0.37 percentage points at the Oct 10th close, its highest since October 2014. That’s still an appealing Italian yield for investors who figure the stress around the referendum had reached its limits, and that the yield will move towards where it’s been for most of the last five years — below Spain’s.