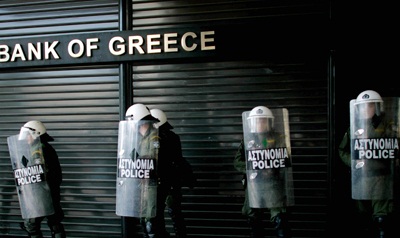 By Juan Pedro Marín Arrese, in Madrid | Those hedge funds resisting debt restructuring shouldn’t nurture any hope to save their money. The titles they hold might be governed by international law. But should Greece turn off the tap, counting on CDS to fill the gap might prove a delusion. Credit default guarantors have already warned they will simply fail to respect commitments entered. The ensuing claims might fatten law firms profits, but investors will bear the brunt of such a tug-of-war.

Main creditors will abide to the tough restructuring conditions imposed on them. They know by heart that any attempt to hold out would turn their bonds into mere rubbish. At the end of the day Greece and eurocrats alike might claim victory if they succeed in cramming most outstanding debt into the safe shore. Any outsider is bound to be left at the mercy of CDS counterparts. Not an amiable company if you happen to file a claim off their purse.

So the Greek package will likely receive substantial backing in the end. But the price to pay in terms of market confidence will be far from negligible. Trust in last resort mechanisms to anchor portfolio value will end up fatally dented. Lasting effects on vulnerable countries might not emerge immediately, but the potential risk of placing money in far from waterproof emissions will sooner or later feed into sheer reluctance to buy such assets. New bouts of market turbulence are to be expected. Europe’s efforts to disguise a full-fledge default into a voluntary arrangement is to blame for plunging the market into utter confusion.