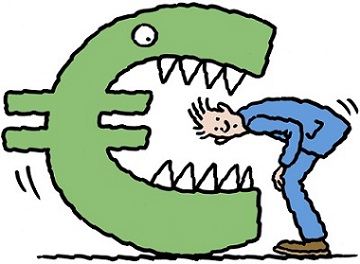 Luis Martí, in Madrid | It stands for Trans-European Automated Real-time Gross Settlement Express Transfer. TARGET2 is a key payment mechanism to European monetary union because it allows all transactions denominated in the common currency to be implemented as easily between member countries as within one country. Otherwise, it would be difficult to talk about common currency. Since the effects and implications of this mechanism are the subject of heated controversy, especially in Germany, we should make clear a general principle: any restrictions that would prevent the full and unlimited fungibility of deposits within the euro zone would produce the breakdown of the currency area. That is probably what the TARGET2 critics are hoping for.

WHAT WE ARE TALKING ABOUT

The transfer of funds from one bank in Seville from our supplier in Barcelona runs without major frictions thanks to a complex and highly efficient technical infrastructure. The mechanism of cross-border payments within the euro zone is far more complicated. It has totally replaced the national systems of payment via a shared platform for nearly a thousand banks, central banks and the European Central Bank (ECB), which successfully runs an average of 350,000 daily operations in real time living up to its name: almost 100% of payments are executed in less than five minutes.

This situation is temporary. At the end of each day, thousands of similar book entries are added, netted and de-bilateralised and become charges/credits of each national central bank on the ECB. Cumulative amounts are identified in the balance sheets of national central banks as 'Other claims (Liabilities) Within the Eurosystem', and in the case of the ECB, which offers net figures, within the Intra-Eurosystem claims item (Liabilities). The ECB's refinancing rate is daily implemented on its accounts and transfers the amounts to the central banks holding credit balances.

In the Bank of Spain's balance sheet, the heading called 'Other liabilities within the Eurosystem (net)' recorded more than €300 billion in late May 2012. Its most important part (not the only one) is precisely the “position of the claim on the ECB BdE transfers sent or received via TARGET 2.” Meanwhile, the Bundesbank recorded in those same dates, same concept, a credit balance on the ECB for almost €700 billion.

The system naturally generates default risks associated with debit positions that some central banks can record. There are critical issues at

this point that should be specified. In TARGET2, all transactions are settled in central bank money: each central bank charges the bank account that the originating bank has in its books. The account's balance is money created by the central bank against bank assets eligible for an acceptable guarantee. The ECB's monetary policy, executed by each central bank, has been so far to inject as much liquidity as credit institutions able to offer collateral would ask for. Thus, exposed in the ECB's Annual Report 2011 with commendable clarity, the ECB and central banks risks are related to the solvency of these monetary policy operations, and not caused by TARGET2 balances. It's the counterparty risk of conventional monetary policy.

In the worst-case scenario, should a bank be unable to fulfill its commitment to its central bank and its guarantees become worthless, there would be a residual risk. It's hard to imagine this situation to result in a failure of a central bank or a central bank becoming insolvent, or the country to withdraw from European Monetary Union and decide to repudiate its debt. But, if necessary, the default would be redistributed among the solvent members of the Eurosystem according to each one's share in the ECB (Bank of Spain, for example, 11.9%, 27% ​​Bundesbank). Losses are therefore not individualised, but mutualised within the Eurosystem.

It should be clear that the mechanism is not related to primary and secondary flows of debt. Governments cannot use it as an alternative to the capital markets. The balances are obtained through multiple payment transactions ordered by the private sector operators through the Eurosystem, which shows  the tight integration of the euro zone economies.

A monetary union is not sustainable if economic agents can not make cross-border payments and receipts without restriction, and it is not exaggeration to say that only thanks to the ECB's unlimited liquidity policy through TARGET2 it has been possible to maintain this principle within the EMU.

From 2007 onwards, the Bundesbank has accumulated, within the operational logic of TARGET2, substantial credit balances. In line with the ECB, the Bundesbank sees this as a perfectly normal process:

“Do not create any specific risk that was not covered by the monetary policy operations (…) is the Eurosystem as a whole that bears the risks” (Press release, 22nd February 2011).

However, some German academics and research centres persistently criticise the accumulation of balances as a weapon to undermine not only TARGET2, but the same monetary union. This controversy should be mentioned because the authors impact with their considerable influence the public opinion and, inevitably, European policies in Germany.

It is disturbing to note that some media outlets, especially German ones, are defending the idea that through a twisted plot, called TARGET2, euro zone members are dumping bad loans on the Bundesbank, forcing it to practice a kind of “silent bailout”, instead of the European Council's “public bailout” of poor economies used to living beyond their means. The reader who has read up to this point may note the demagoguery touch: the mechanism does not register and therefore does not fund public debt balances.