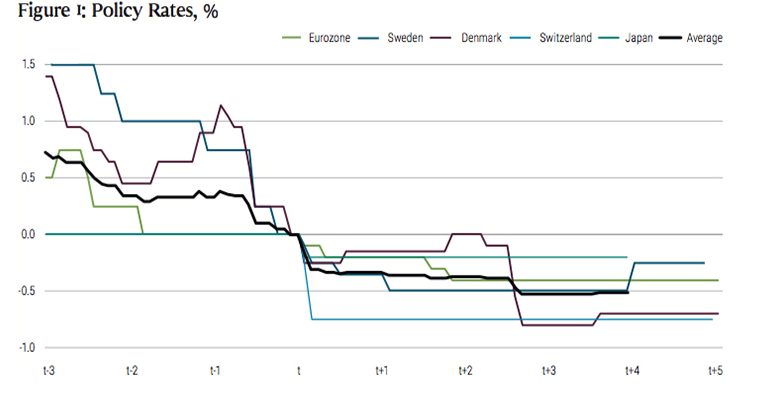 Nicola Mai and Peder Beck-Friis (Pimco) | We believe that negative policy rates could do more harm than good to economies and markets, due to their impact on banks, insurance companies and pension funds, and also a possible adverse effect on consumption. Below, we discuss potential implications for investors.

The unintended consequences of negative interest rate policy are already evident. We believe that negative rate policy does not have much further room to run.

Persistently low or negative interest rates, alongside expanding central bank balance sheets, are likely to continue to support risk assets for some time, as investors are forced to “reach for yield.” However, such a policy may be damaging in the medium or long term.

Why are negative nominal interest rates so troubling? Economic theory favors real rates, which have already been negative in most developed countries for some time. In theory, lowering the nominal policy rate into negative territory should produce many of the same expansionary effects as cutting the policy rate in a positive rate environment: to make individuals and companies save less and spend and invest more. Lower real rates should also lead to a depreciating currency, which improves a country’s external competitiveness, and supports asset prices, boosting the wealth of the private sector.

1. They impair the banking system. As the policy rate turns more negative, banks start earning less return on their assets, while the interest they pay on deposits generally stays above zero – due to relatively high competition for deposits, legal challenges, political resistance and the potential for cash withdrawals. As profits decline, banks may issue fewer loans to businesses and households, or raise the interest rate they charge for those loans. Lower bank equity prices risk exacerbating these effects.

2. They create significant challenges for other parts of the financial system. This includes the pension and insurance sectors, which offer nominal return and minimum income guarantees in the future, but that are hard to deliver when interest rates are negative, as they don’t generate enough yield.

3. Negative nominal rates may lead to more, not less, savings. Economists refer to this concept as “money illusion,” as what should matter – at least if people were completely rational – are not nominal but rather real, or inflation-adjusted, variables. While “money illusion” may hold for rate cuts in a positive rate environment too, the effects are likely magnified under the zero line.

The unintended consequences of negative interest rate policy are already evident. Mitigating measures like tiering2 can help some banks, but as the European experience shows, these tools have limitations and side effects, which diminish the effectiveness of the policy.

On balance, this leads us to conclude that negative rate policy does not have much further room to run, and that its persistence will end up damaging markets and the macro outlook. Looking ahead, it is possible that the ECB will lower rates a little further, but market expectations of another 5 basis points are close to the maximum we expect. Notably, the Riksbank, the central bank in Sweden, seems set to lift its policy rate out of negative territory in December, in the face of ongoing economic slowdown, as it appears concerned about the consequences of negative interest rates.

In the U.S. and the U.K., negative rates seem unlikely, given policymakers’ doubts on its effectiveness and political resistance to the concept. If policy rates in the U.S. and the U.K. ever go to zero, and more accommodation is needed, these central banks would most likely focus on QE and other measures other than negative rates. In Japan, it is possible the central bank will cut its policy rate further, but only by a small margin – Japanese banks are heavily dependent on deposits to access funding, making them vulnerable to a squeeze in margins from negative rates (wholesale funding accounts for less than 10% of Japanese banks’ total financing, compared to around 60% in Sweden and 40% in Italy and Spain).

Finally, at a global level, extending a negative rate policy might exacerbate political accusations of currency manipulation, not a welcome move in the midst of ongoing trade tensions.