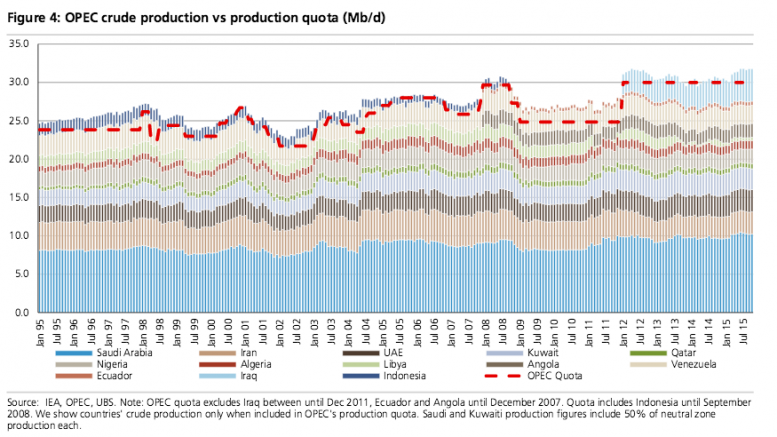 UBS | Last week’s 168th ordinary OPEC meeting in Vienna concluded without the group agreeing on any meaningful change in strategy. Contrary to an earlier wire report that the group was to lift its target outp ut ceiling to 31.5Mb/d the defining feature of today’s official release was the lack of any explicit reference to either the quota or to actual production. That being said, the absence of a physical cut is in line with our expectation: we had anticipated that the group might lift the target to 31Mb/d to accommodate Indonesia (confirmed today as rejoining), but in the event there was not even that change. The group cited continuing uncertainty (timing of Iranian return; magnitude of non – OPEC declines into 20 16) and will watch how the market evolves in 1H16 ahead of the next ordinary meeting, scheduled for 2 June.

While we do not believe the market expected a production cut – the rally in the lead up can be attributed to some hedging against the (small) possibility following speculation of a Saudi proposal – the absence of one may weigh on prices and in all likelihood will continue to do so until non – OPEC growth clearly turns negative (w e note today’s BHI rig count showed US oil rigs down another 10 w/w). Dramatic cuts to US E&P capex (2015 down ~40% y/y and UBSe – 28% y/y in 2016) and an absence of project sanctions elsewhere (just 5 ytd comprising 0.8Mboe/d plateau liquids production) im ply a decline is coming – we forecast a 0.5Mb/d contraction in non – OPEC supply next year (IEA, 0.6Mb/d, EIA 0.3Mb/d) bringing the call on OPEC to 31.6Mb/d by 4Q16.

While the meeting has seen dif fering interpretations – an effective increase in the quota to 31.5Mb/d (acknowledging actual output); or a roll – over of the existing 30Mb/d; our overriding impression is one of indecision and, to some extent, powerlessness. Away from the official press co nference, commentary from departing delegates ranged from vague references to ‘continuing our strategy’ (Iraq), without any clear elaboration of what that strategy was, or simply ‘no decision’. OPEC’s weak message emphasises that at present the group is not in control of the market or indeed its own production levels, and hence is largely irrelevant.