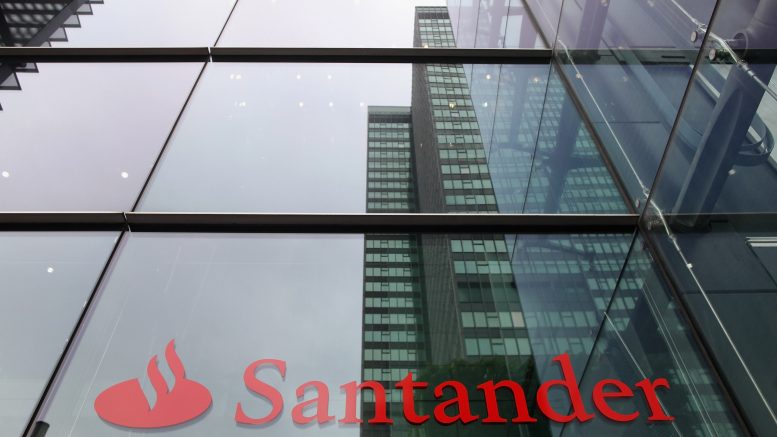 Banco Santander increased attributable profit during the first nine months of 2018 by 13% to €5,742 million ( +28% in constant euros ), as strong growth in revenues in several markets, including Brazil, Spain, Mexico and Portugal, combined with improvements in credit quality , more than offset the impact of exchange rate depreciation against the euro in certain currencies, including the Argentine peso. Profit before tax increased by 23% Year – on – Year ( YoY ) in constant euros to € 11,230 million, with underlying profit increasing in eight of the Group’s ten markets.

In the third quarter alone attributable profit was €1,990 million, 36% higher than Q3 2017 , which was impacted by €515 million in one-off charges, including 300 million restructuring charge for Banco Popular. Profit before tax for the third quarter was up 17 % YoY in constant euros.

Gross income in the first nine months of 2018 increased by 9% in constant euros to €35,882 million, with the Group increasing lending and customer funds by 3% and 4% respectively in constant euros, while increasing the number of loyal customers (people who see Santander as their main bank) by 19% to 19.6 million.

Ongoing investment in commercial transformation and digitalisation led to a 8% increase in operating expenses in constant euros, however, the Group’s cost/income ratio, a key measure of efficiency, remained among the lowest of our peer group at 46.9% (compared to a peer average of over 65%).

In the first nine months of 2018, the number of customers using digital services increased by 24 % YoY to 29. 9 million, with the ongoing investment in technology driving an increase in digital service adoption. In September, Openbank, the Group’s 100% digital bank, launched a n automated investment service as well as new developments and functionalities , including , among others, a secure password manager feature, and an account aggregator to connect accounts and products from other banks. Also during the quarter, Santander UK launched the Digital Investment Advisor, a new inv estment advisory tool for retail customers , a vailable on mobile.

A balanced presence across both mature and emerging markets remains one of Banco Santander’s key strengths. During the first nine month of 2018 , the Americas contrib uted 48 % of Group profit and Europe, 52 %. Brazil was the largest contributor to Group earnings, with 26% of total underlying profit, followed by Spain with 1 7 %, and the UK with 14%. The lending book also remains well diversified across business segments and geographies.

Overall the economic outlook remains positive in all our largest markets and w e expect the Group to benefit in the medium term from an improving interest rate environment , and ongoing recovery in Latin America.

In the third quarter, Santander generated 31 basis points in capital, bringing the Group’s fully loaded CET1 ratio to 11.11% at 30 September 2018 (applying the transitional arrangement of IFRS 9), in line with its target for the end of the year. This ratio does not include the sale of WiZink, which is expected to close in the coming weeks and add an estimated nine basis points to the Group CET1 ratio, or the impact of the full application of IFRS 9 (-27 basis points), which is subject to a five -year transitional period before full implementation is required in 2022. Over the last 12 months, Return on Tangible Equity (RoTE), a key measure of profitability, has increased by 70 basis points to 11.7 %, while underlying RoTE increased by 3 4 basis points to 12.1%, making Santander one of the most profitable banks among its peers.Tangible net asset value per share was 1.5% higher than the second quarter of 2018 and 1% lower than September 20 17 at €4. 16 (+ 5 % excluding the FX and IFRS implementation impact).

Earnings per share (EPS) increased to €0.331 , up 5% compared with the first nine months of 2017, while underlying EPS remained broadly flat at €0.349 . The Group maintains its target of achieving double digit EPS growth in 2018. At t he AGM on 23 March 2018 , the b ank announced its intention to increase the dividend paid from 2018 profits by 4.5% to 23 cents per share , subject to approval by the board and general shareholder meeting.