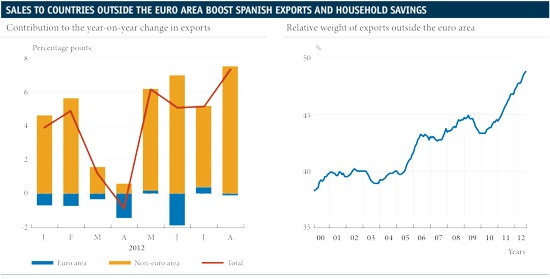 If we were to look back over the reports of the last few months, we would see that the foreign sector is the only one to have brought, periodically, good news on the economic situation. And this is even truer than ever this month. In fact, the foreign sector’s good performance in July placed the current balance at a positive level for the first time in fourteen years, specifically with a surplus of 499.6 million euros.

The good performance shown by the balance of goods and services lies behind this improvement. We expect this contribution to continue and help to post further surpluses for the remainder of the year. The data available for August’s trade balance and the dynamism of tourist visits during the third quarter of the year are in line with this forecast.

With regard to August’s trade deficit, this decreased by 36.1% compared with the same month last year. This improvement took place within a context of an upswing in exports that, after remaining almost at a standstill in April, gradually increased their pace of growth to 7.4% year-on-year.

But the correction in the trade deficit has also been boosted by the fall in imports, down 3.1% year-on-year in August. Particularly significant was the fall in the non-energy component in August, namely 11.8% compared with the same month in 2011. Weak domestic demand at the end of the year and the start of the next will undoubtedly maintain this trend.

Another factor that helped to adjust the external imbalance in the third quarter is tourism. The number of foreign tourist visits in the third quarter of 2012, totalling 21.8 million, represented a new record high. Should the pace of growth in tourist numbers continue over the last few months of the year, the cumulative figure for 2012 as a whole will come close to 58.5 million, becoming the second best year since data were available.

The good figures recorded for the balance of goods and services allows us to be relatively optimistic regarding the correction in the current balance. Between January and July there was an adjustment of 0.7 percentage points. This rate could speed up over the next few months. This would mean that the forecast for the current deficit for the whole of 2012, namely 2.6% of the gross domestic product (GDP), would have to be revised slightly downwards.

Within this context of a fall in net borrowing, we expect the net debt position of the Spanish economy compared with the rest of the world to diminish. This variable, which represents the stock of liabilities minus assets with other countries, reached a peak in 2009 of 93.7% of Spain’s GDP. Since then, the lower current deficits recorded and the positive impact of valuation effects (including variations in asset and liability instrument prices and the exchange rate) have helped to reduce the country’s debt position by 3.1 percentage points up to the end of June 2012. Of note, however, is the change in external financing instruments.

The Bank of Spain’s debt position increased considerably due to extensive use of Eurosystem funds, a source of financing that, over the last year, has mainly replaced portfolio and short-term investment.