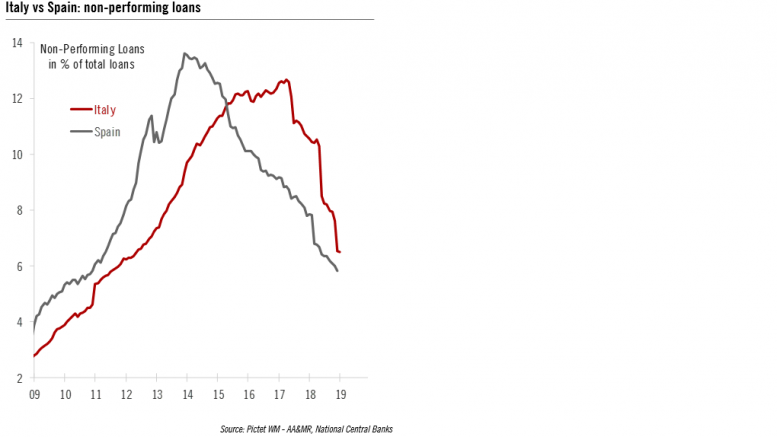 Spanish banks are last in Eurozone in Tier 1 and penultimate in regulatory capital. But they have an unquestionable competitive advantage: they are the only transparent ones in the Eurozone for the ECB and for the other investors being the only audited ones. There are no skeletons in the closet even if there is less capital to compensate.

“Spanish banks have decisively confronted the challenge of reducing the bad housing debt s generated during the crisis. In this way they have generated a greater margin of manoeuvre for fulfilling their mission which is nothing other than to finance households and companies”, explained José Luis Campuzano, of the Spanish Association of Banks.

“Reducing the number of foreclosed assets in the portfolio is not only important for improving the profitability of European banks, but also a fundamental part of completing banking union without which the burdens of the past will continue to undermine confidence in the sector.”

Just a week ago, the ECB announced that it will offer more liquidity to the banks with the launch of TLTRO III, at the same time as delaying the increase in interest rates until at least the end of 2019. According to Ofelia Marín Lozano, heading up Sicav 1962 Capital, “offering more liquidity to the banks should result in them being seen outside as a lower investment risk and the trading multiples rising. European banks currently trade at seven times profits ( on very low profits, current profits being obtained in a very adverse environment with low or zero interest rates). Without needing to increase profits (which will not happen significantly until interest rates rise, with nine, twelve, fifteen or eighteen months …), a return to a perception of normal risk, a return to trading at PER 10 instead of PER 7, already would guarantee a stick market recovery of the order of 40%, from the current 95 points of the Euro Stoxx Banks to levels over 130 points”.

“no bank will have financing problems during the next two to for years (the programme will last two years for loans of two years …), because it will be able to seek financing from the ECB at a rate linked to the official rate (currently 0%) at any moment for an amount equivalent to 30% of their eligible assets (simplifying, the mass of their active loans to households and companies). This means that even banks which at any moment could suffer an imbalance between financing from clients (deposits) and financing to clients (loans) even those which have fewer deposits than credits, can continue to lend without needing to recur to the bond market (which could be limited or expensive) simply by seeking money from the ECB”.

When the apocalyptic scenarios are ruled out (a chaotic Brexit, chaos in the public accounts of any significant Eurozone country), in short, when we stop being afraid of an eventual break up of the Euro, the normalisation of multiples, through the normalisation of the risk perception, should lead to a clear stock market revaluation. In addition, when within a year of a year and a half the Euribor again is clearly in positive, the results will improve.

The possible merger between Commerzbank and Deutsche Bank seems driven by the German government, the principal shareholder in Commerzbank and, obviously worried to ensure that in an eventual process of cross-border mergers (which could begin within a couple of years) there is a German bank of comparable dimensions to the large French, Spanish, Italian or even Dutch banks.

“You have to think that, currently, even if the two largest German banks are merged, the stockmarket value of Commerzbank + Deutsche Bank together is well below that of Santander, BBVA, BNO, Crédit Agricole, Intesa of ING on their own. The merger between them would suppose significant cost savings (of the order of 3 billion euros a year, a quantity superior to the current aggregate profits of the two banks), as a result of optimising the work force (between then they have more than 140,000 employees, which could in the medium term be reduced by 15-20,000).”, Marín-Lozano points out.