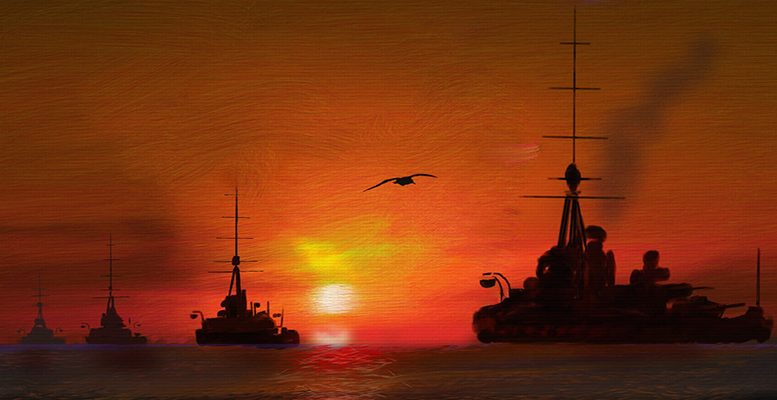 The Second Battle Squadron. Photo by Pat McDonald on Foter.com

Giada Pizzoni via The Conversation | In 1585, English scientist Thomas Hariot dreamt of the opportunities Atlantic trade would offer to Britain as he strove for his country to break away from continental and Mediterranean trading routes to ensure a profitable future for him and his countrymen. Silks, wine, oil, oranges, lemons would all come from the new world – and indeed, Atlantic trade did boom and Britain prospered.

But it was the European continent that facilitated this success by making the necessary trade deals possible. More than 400 years later, the UK is once again dreaming of the unimaginable riches that could be had by breaking away from the old continent. Brexit would have globalisation in trade as the answer, but over the past four centuries as its empire has risen and fallen, it is Europe that provided the UK with many of its most sought after commodities. It’s hard to imagine this changing much in the future.

In the 16th century, European expansion into the New World was in full swing. Britain was certain that the Atlantic Ocean would offer unlimited opportunities and incredible wealth. It hoped for the same fortunes that had befallen the Spanish – a land full of gold, silver and a native population that it could enslave.

But the British were soon disappointed by their discoveries. The northern part of the Americas did not have the same mineral-rich mines as the south. There was, however, fertile soil ideal for growing crops. And so the British began to set up plantations; displacing the native population, importing slaves, growing tobacco, cotton, sugar, and fishing cod. These staples soon proved extremely profitable and enriched both planters in the colonies and merchants at home while funding what would go on to become a great empire. Finally, Britain thought, it was possible to break the continental yoke and find new lands and markets.

Europe as a bridge

Unlimited opportunities seemed to lie ahead, but it was not to last. The empire rose and shrank, and despite the importance of newly emerged Atlantic links, the Mediterranean remained crucial for Britain’s balance of trade and ensuring its global exchanges.

Even under full imperial expansion, tapping into continental markets as sources of imports and as consumers of British exports was still essential. Britain soon became one of the most important markets in the world as it re-exported American products all over Europe and beyond. But, again, the balance of trade relied upon the continent, and non-European trade was profitable only because of existing continental demands.

Spain, for example, was a crucial trading partner throughout the 16th and 17th centuries. Britain needed to tap into the Spanish imperial markets that were vital for the development of its booming economy at home. Spain acted as a bridge for moving American gold, silver and dyes to the north of Europe, in exchange for Atlantic cod and the tools Britain needed to build its colonies. Meanwhile, Mediterranean fruit went to the British Isles, together with olive oil, Ionian currants and Levantine spices.

As I’ve found in archival research for my forthcoming book on the period, the British had an insatiable appetite for Mediterranean products and the new global markets were part of a system that helped Britain balance its books with Europe. Ultimately, it was continental Europe that made Britain’s global exchanges truly viable and the North American trade profitable. Despite the focus on the Atlantic, the Mediterranean stayed relevant, representing almost half of British imports and exports.

Now, as before, Britain aims to revitalise its links with the world beyond the EU. It is looking to the US, India, China, Japan and Australia for trade deals. Surely, it thinks, all those countries are waiting to rekindle their old commercial links. Perhaps, but the rules of the international system have changed – in colonial times Britain benefited from slavery and unfair trade practices.

Then there’s the issue of what Britain will export to these countries. A great deal of UK manufacturing and the exports produced is built on EU single market supply chains. As before, Britain remains reliant on its neighbours and biggest trade partner at present.

It is undeniable that the discovery of new territories and trade routes in the 16th century brought Britain benefits. But this trade was successful because Britain was able to trade these products with continental Europe.

Needless to say, we live in different times and the goods (and services) being traded take a different form. But Britain should learn from its history where it was reliant on the rest of Europe for its successful global trade and the fact that it has never been able to break away from the continent, despite repeated attempts.

(* Giada Pizzoni is a teaching Fellow at University of Warwick)