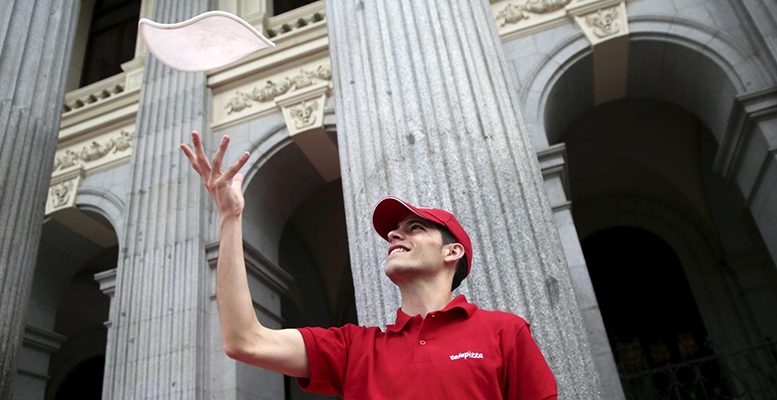 Jose Benito | Since its stock market debut in April at 7.75 euros, Telepizza’s share price has dropped 39% compared with a 6.5% decline in the blue-chip Ibex 35 index over the same period. There are a lot of factors behind this relative negative performance, including the company’s overvaluation at the time of its listing or disappointment with its quarterly results.

We will now analyse Telepizza’s business model, its financial situation and its prospects. Our aim is to establish whether the drop in the share price provides a buy opportunity with a medium-long term view or whether there are potential investment risks.

Telepizza is a global pizza home delivery chain which is the fifth biggest in the world by revenues and leader in the US market. It is present in 16 countries on three different continents, with 1,325 outlets world-wide. Of this total, 66% are franchises and the remaining 34% are owned. The company is a leader in Spain, with a 53% market share, as well as in its other key markets: Portugal (51%), Chile (52%) and Colombia (33%). One exception is Poland where it is number two in the market with a 16% share. It also has a direct presence in Peru and Ecuador, where it comes in second and fourth place respectively. In other countries it has franchise or master franchise agreements (the United Arab Emirates, El Salvador, Panama, Angola, the UK, Guatemala, Bolivia, Russia, Saudi Arabia and Malta).

Telepizza opened its first outlet in 1988 and in 1992 inaugurated its first dough factory. Then it began its international expansion, via organic growth, opening up markets in Portugal, Poland and Chile. In 1996, the company listed on stock market for the first time, remaining there until 2006, when private equity firm Permira along with the Ballve family delisted it. Its international expansion continued in the markets mentioned above, mainly via franchise or master franchise agreements. In 2014, private equity firm KKR became a shareholder in Telepizza. That same year the company sold its cheese factory in Avila a Ornua, with which it later signed a long-term distribution agreement.

As far as sale outlets go, 2004 was a something of a landmark in Telepizza’s history, as it began to grow its online business in all its own stores throughout Spain. The implantation of Telepizza online continued in 2005, when it was operational throughout the whole chain and also in some of the franchises. From 2010 until now, Telepizza has been boosting this business, creating new channels for communication and sales. Apart from the online sales outlet telepizza.es, it has also created mobile apps (which represent 47% of online sales) and has a growing network presence.

There are 4 key factors which contribute to Telepizza’s success: 1) a global menu which is adapted to each market; 2) the franchise model (66% of all stores); 3) frequent deliveries from the outlets; 4) an integrated supply policy, with long-term contracts.

After 10 years out of the stock market, Telepizza began trading again last April. After the listing, the main shareholders are Foodco Finance (Permira and the Ballve family’s investment vehicle) with 11%, KKR with 7% and the management team with 1.5%. The remaining 80.5% is free float. During the IPO, the demand was concentrated with over 100 institutional investors from 14 countries, with 50% of them US investors and 37% from the UK. The other 13% were from other countries across the globe. On their first day of trading, the shares fell 19.35% to 6.25 euros. Analysts attributed the slump to the fact the company had been over-valued, as well as to the market’s negative performance. It was the worst stock market debut in Spain.

Telepizza’s strategy in the coming years will be focused on growing like-for-like sales in Spain and in international markets via initiatives like improving its digital/mobile platform and revamping its outlets. There are also plans to sign new master franchise contracts with local experts in new markets which are less well known, accelerating growth in areas which have not yet been explored.

Innovation and the ability to adapt to local circumstances are pillars of Telepizza’s strategy. This has allowed the company to maintain a policy of higher prices and higher average revenues. In 2009-2013 there was a price war in the sector and Telepizza abandoned its promotions, concentrating on differentiating its product to justify a less aggressive price policy. The launch of innovative products has fuelled strong sales growth from the very first moment they are offered. As far as its local adaptation is concerned, Telepizza has shown greater flexibility than its competitors in suiting its menu to local tastes. These currently account for about 20% of the products on each local menu, justifying charging a higher average price.

To achieve its strategic goal of boosting like-for-like sales, the company is going to leverage on its different business lines:

Telepizza is refurbishing its outlets and hopes to complete the process in 2019. This investment is aimed at creating a fresher and more homogenous format, which is driving an around 2-3% rise in sales in the outlets where it has already been completed. And the company has also decided to target commercial centres, where its penetration is very low (about 7%), as a way of continuing to grow strategically in Spain. At the same time, it plans to export this format to other countries where it operates. This kind of outlet is adapted to the commercial centres’ offer, as well as to its sales and operating policy. The establishments may or may not have a food court and they don’t offer home deliveries, due to the consumer habits in these kind of spaces. Telepizza has already successfully implanted this model in countries like Chile, where a third of all sales are generated in commercial centres.

In this way, the company plans to take advantage of the growth forecast by the experts for the pizza sector in general and for pizza delivery in particular (estimated at around +6% CAGR up to 2019).

On November 7, Telepizza released its nine months to September 2016 results. See table below for details:

In the third quarter, Telepizza’s chain sales grew 5.3% in constant currency terms in its core overseas markets (excluding master franchises), driven by like-for-like sales growth of 3.2% This led to a 7.4% rise in underlying EBITDA during this period.

Chain sales in Spain grew 2.6% in the third quarter, boosted by the opening of 16 new outlets (21 in total worldwide).

International chain sales in core markets grew 11.4% in constant currency terms in the third quarter, with a 9.0% rise in like-for-like sales, the biggest in Telepizza’s recent history.

Group EBITDA rose 12.3% in the nine months to September, driving a 1.7pp margin rise. In the third quarter, EBITDA grew 7.4%, underpinned by international sales growth, the increase in the average price in Spain and operating leverage. Although this was limited in part by a reinvestment to improve the level of services.

Thanks to the over €100 million euros capital hike carried out at the same time as its IPO, Telepizza has managed to reduce its debt from 4.4x DN/EBITDA before the transaction to 2.6x, cutting net det from €251 million to €155 million. But this is still far removed from the net cash position the company had when it was delisted in 2007. The average cost of debt is about 3%, according to the company.

Despite the fact the sharp decline in Telepizza’s stock price since its IPO could be a buy opportunity, we believe there are risks to this investment which are not reflected in its demanding valuation ratios (PER16e 16.5x and EV/EBITDA16e 11x). The business has practically no barriers nor any competitive advantages. It has registered losses in the last few years, demand is very elastic to price and it’s increasingly more difficult to offer differentiated products despite huge investment in innovation. But Telepizza’s business model, where franchises have more weight compared with its own stores, and there is a high level of flexibility for adapting to local demand internationally, mitigates those risks to some extent. That said, we would prefer to wait until there is a more positive trend in the results before making any investment.