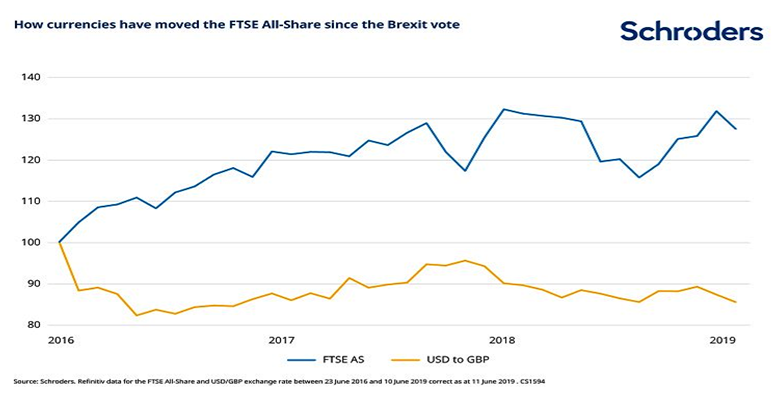 David Brett (Schroders) | It could be said that the main barometer for Brexit if the value of sterling. Since the withdrawal referendum, the British currency has fallen more than 14% compared to the dollar and 13% compared to the euro.

More than two thirds (70%) of the income of companies that trade on the FTSE All-Share are generated abroad. When these incomes are converted from a strong currency into sterling they are worth more. The value of shares in the UK correlates with the fall (and sometimes rise) of the pound compared to the US dollar.

The relatively stable global economic context has helped. Global investors have accepted the so-called Goldilocks scenario: a combination of stable growth and low inflation with low interest rates. Support for the market and the UK economy has come from the Bank of England (BoE), which has maintained a loose monetary policy, ensuring that companies and markets have access to financing.

However, the UK stock market has fallen behind global shares. Since Brexit, shares in China have risen 42.1%, according to Thomson Reuters data; those in the US have risen 41.6% and global shares 32.7%. Shares in the UK have risen 28.1%, slightly ahead of emerging market and Japanese shares, which rose 27.3% and 26.8% respectively. European shares rose 17.5%.

Of course, there are many other factors which have influenced British and other markets during this period. The global nature of British equities means that international events mark the direction of the market, and that has continued to be the case since the referendum. Some of the main international drivers over the last three years have been the monetary policy decisions taken by the main central banks, global economic activity and, more recently, trade tensions between the US and China.