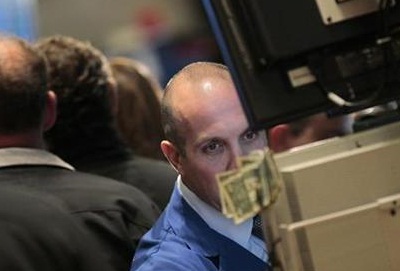 NEW YORK | Restless and suspicious. That is how Wall Street seems to be feeling after France and Greece’s pushback against austerity measures. U.S. stock futures fell on Monday, while Treasuries gained. Investors wonder whether the stimulus advocated will derail bailout deals. And what will happen now that the Sarkozy-Merkel tandem is broken and the Greek parliament will have three new anti-bailout parties represented. This added to the uncertainty created by last week’s disappointing jobs data in the U.S.

“All things considered, U.S. futures are rebounding nicely this morning,” said Todd Schoenberger, managing principal at The BlackBay Group. “The primary explanation is because the nervous feelings Wall Street had following Friday’s abysmal jobs report have been placed on the backburner, at least temporarily. Oddly enough, the Greece and France elections have helped downplay the severity of our own domestic economic concerns, and turned the focus to the horrific immediate outlook for the eurozone.”

“This is a big event not only for France but for the Euro,” Ed Luce, author of Time to start thinking explained to MSNBC network. “Merkel did endorse Sarkozy and that is very unusual”.

“The market is not happy with the elections. Investors believe this represents the first step toward (Greece) leaving the Union,” said Jack Ablin, chief investment officer at Harris Private Bank in Chicago.

Yet not everyone is feeling gloomy in New York’s floor. Several analysts had been emphasizing for a while that an excessive tightening of one’s belt could cause suffocation.

Billionaire Warren Buffett, the world’s most successful investor, is not buying Facebook but is still interested in Europe, even if he considers problems will persist on the other side of the Atlantic. The global market selloff wasn’t making any difference to his investing strategy.

As for Europe, Mr Buffett said it’s a huge market that is not going to go away:

“It’s the problem of dealing with 17 countries. If you are going to have a monetary union you need somewhat common fiscal policies as you go along and that is difficult. [As for] the U.S., it’s in a different path. We addressed the problems of our banks very decisively three years ago. We put a lot of capital in them. Plus we have our own currency (…) and that makes it a completely different game.”

“Perhaps the reality of the euro zone right now is that this isn’t just about what Hollande does now. It’s about what Merkel wants to do now, and what the ECB wants to do now. The old consensus is no longer politically sustainable. The regime changes in France and Greece, and Hollande’s presence at the negotiating table, offers an excellent opportunity to change course if that’s what the euro zone’s leaders want to do. But is it? What do the euro zone’s leaders want to do now?,” writes Ezra Klein for The Washington Post.

“The French are revolting. The Greeks, too. And it’s about time. (…) What’s wrong with the prescription of spending cuts as the remedy for Europe’s ills? One answer is that the confidence fairy doesn’t exist — that is, claims that slashing government spending would somehow encourage consumers and businesses to spend more have been overwhelmingly refuted by the experience of the past two years. So spending cuts in a depressed economy just make the depression deeper. Moreover, there seems to be little if any gain in return for the pain.” stresses Paul Krugman in The New York Times.

“Has the lesson been learned? It’s hard to tell. There has been no suggestion that austerity should be relaxed, only that some efforts to boost growth be used to balance the screw tightening. Time will tell whether Socialist French President-elect François Hollande can put in place his growth-oriented policies without triggering a market attack on French government bonds or whether the Greek political process can find a way to keep the country in the euro without condemning its citizens to penury for decades,” Market Watch’s  Christopher Noble says.