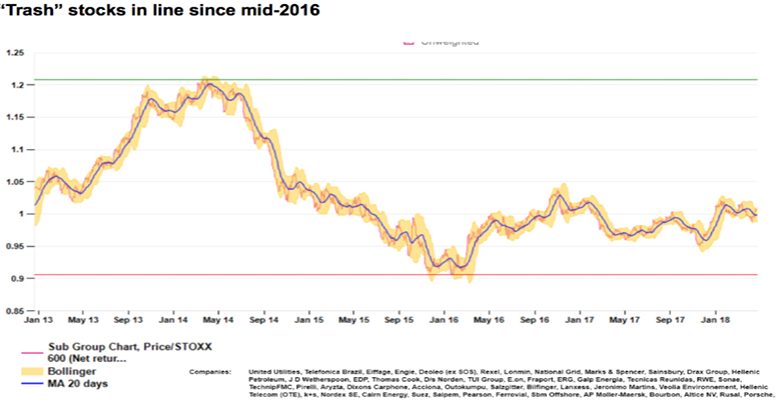 Weaker balance sheets are not very attractive…From time time, we check out whether the “trash,” as defined by a non-investment grade credit rating, is a good investment. At the moment, it doesn’t seem to be. We define the non-investment issuers as those whose rating is below BBB in AlphaValue’s own valuation metrics. We do this annually. We choose 95 non-financial stocks (ex property) which are non-investment in terms of their 2018 rating.

The graphic of the relative 5-year trend (compared to the Stoxx600) is fairly revealing. Since mid-2016, when the fear of deflation basically disappeared, there has been no difference in the evolution of “trash” stocks. The return is unweighted. If it had been weighted, it would have a straight line decline in five years with a relative loss of 40% compared with the Stoxx600.

It’s worth highlighting an earlier comment: during the period of deflation (for example, from mid-2014 to mid-2016), the same coverage had a lower return. Cheaper money was not considered a real plus. In reality, issuers with a weak balance sheet never experience the benefits of a drop in the cost of money in a deflationary context, given that it’s very unlikely they generate sufficient cash flow to be able to pay the principal. So the “lenders” want bigger margins.

So much so that, with QE or without financial supports, it’s difficult to find a period of time when lower quality balance sheets show any difference in terms of share price evolution. This is a rather worrying observation as it indicates a more solid European context and, possibly, moderate inflation, which should be an adequate backdrop to give new life to those companies whose finances are “stretched.” On the other hand, sticking with stocks rated A or better, would have been a winning strategy. The following graphic shows an evolution of the relative price over 5 years of stocks with an A or higher rating, in comparison with the NIG (non-investment) kind. It seems fairly obvious.

The next step is to keep an eye out and note when the market supports the risk “takers” breaking this trend.