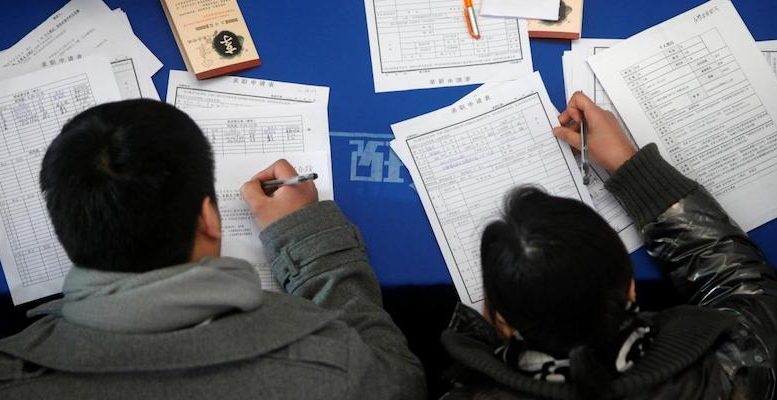 Caixin |On April 17, China announced for the first time its long-awaited surveyed urban unemployment rate. The registered unemployment rate, which has been used by China for many years, has increasingly failed to reflect the reality of unemployment in the country. The surveyed urban unemployment rate covers the entire population of urban residents, and uses household sampling surveys to obtain data and reflect in a comprehensive, accurate, and timely manner the country’s macroeconomic direction and the labor market’s resource allocation situation. The new rate is also expected to produce more reliable data to support macroeconomic management and decision-making. The publication of this data also provides a new opportunity for policymakers and the public to seriously consider the employment problems facing China.

Employment is the most important livelihood of the people. The Chinese government has closely watched this issue for a long time. The country began proactively shaping its employment policies at the turn of the century, when state-owned enterprises were laying off tens of millions of workers. In 2008, the Employment Promotion Law came into effect, further highlighting employment’s role in social and economic policy. The 19th Party Congress’ report said, “We must give high priority to employment and pursue a proactive employment policy, striving to achieve fuller employment and create better-quality jobs. We will launch vocational skills training programs on a big scale, give particular attention to tackling structural unemployment, and create more jobs by encouraging business startups.” The report, delivered by President Xi Jinping, pointed out the goal and focus of the current employment policy while also describing the direction of future efforts and solutions.

At the moment, there are three main points of view regarding the employment problem. The first point of view, affected by habitual thinking, believes that the employment situation is still grim, and worries in particular that if the economic climate deteriorates, large-scale unemployment will return. The second point of view, focusing only on the shrinking population of workers, believes that the labor market has already reached a stage where demand far outstrips supply and that unemployment is no longer an important issue. The third point of view is a deep anxiety over the prospect that developments in artificial intelligence and other technologies could one day make human workers obsolete. Out of these, the first attitude is relatively widespread among government employees, and is thus worth closer attention.

Macroeconomic policies need to shift from focusing on increasing total employment to looking ahead and pre-empting structural employment. This year’s State Council government work report set the goal for the surveyed unemployment rate at 5.5%, significantly higher than the actual 4.98% surveyed unemployment rate at the end of 2017. This shows that policymakers have some degree of tolerance for slight economic decline. However, eliminating the old-fashioned idea that there is a simple relationship between employment and economic growth will require great effort. Many people worry that a slight macroeconomic downturn will cause unemployment problems and bring about social disorder, and they cling to the idea that the solution is increased macroeconomic stimuli. This view would create overcapacity, more “zombie enterprises,” and postpone the population’s upgrading of its skills and knowledge, undermining future employment.

For this reason, it is of utmost importance that China improves its incentive mechanisms for government officials. The Employment Promotion Law stipulates that governments and departments at all levels should establish a system of targets and responsibility for promoting employment, and that government departments should assess and supervise the performance of subordinate departments in relation to this system. This provision previously caused a major increase in attention given to employment at all levels of government. However, under new circumstances, China still needs to find new models and mechanisms to guide all levels of government toward focusing on structural unemployment.

Structural unemployment calls for structural reform. The government should vigorously and comprehensively deepen reform, allowing this scarce factor of production — labor — to move more freely. The market price of labor will become more accurate and more sensitive to changes in supply and demand. In order to achieve this, China must conscientiously promote reform of the household registry (“hukou”) system, acknowledge the right of rural populations to migrate into urban areas, and allow rural transplants to become official urban residents. Anti-urbanization efforts, which have appeared in some regions, run counter to the aim of solving structural unemployment.

To solve the problem of structural unemployment, China must also pay attention to key population groups. In the near future, unemployment will become relatively pronounced in two groups — the former employees of industries hit by capacity cuts, and the huge population of college graduates. In the medium to long term, China’s should pay special attention to the education and employment problems faced by “second-generation” and “third-generation” rural populations, as well as young people living in minority ethnicity regions.

The new economy will bring about “creative destruction.” People frequently exaggerate its tendency to destroy old jobs. But they underestimate its ability to create new jobs. According to researchers, China’s new economy could stimulate the creation of tens of millions of jobs, both within new economy industries and in other industries. According to the Mastercard Caixin BBD China New Economy Index, at the moment, hiring by new-economy employers already accounts for around 30% of hiring in the country. The fear that robots will replace humans has clearly been exaggerated. The energy of government at all levels should not be spent primarily on protecting old industries. Rather, it should focus on creating an attractive business environment for entrepreneurs and allowing entrepreneurs to fulfill their potential.

Announcing the surveyed unemployment rate is only a start. In the future, China will need to continuously improve and systematize its unemployment index. Full disclosure of the relevant statistics is a sign of a confident government. The public also hopes that this process will become the process of tackling structural unemployment. The key is that policies must have sufficient foresight and must steer clear of the detours other countries have made. The goal is to prevent structural unemployment from becoming an entrenched problem.