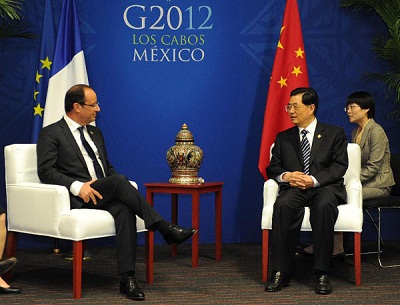 BEIJING | China is very good at persuading the international community. Current Chinese leaders had a great master: the strategist Sun Tzu who left a legacy on the art of seducing and wining. No matter what kind of cooperation Beijing has in mind, their main aim is to ensure that a win-win resolution is reached. Cooperating at the expenses of loosing some advantages is not an option.

Therefore, one should not expect the world’s second economy to play a leading role in saving an ailing Europe, without getting the rewards they want in exchange.

With Europe suffering a severe debt crises and with emerging market like China being the engines of global growth, China is taking part in the G20 summit in Mexico with the aim to meticulously craft a safety net for their economy in return to their more than needed contribution to the International Monetary Fund’s resources to help in debt countries.

n’t want Europe to collapse, nor does the United States; and of course Europe itself is more than keen on avoiding such a disaster to happen. But whoever greatly contributes to Europe’s salvation would get a bigger role in the international community, a reward difficult to swallow by traditional world leaders such the United States who are extremely uncomfortable with China’s condition to get a bigger say in IMF’s body. China doesn’t want to be overshadowed either, rejecting the idea of contributing to a fund that it is not able to properly manage.

As quoted by the South China Morning Post, Gregory Chin, China Research Chair at the Canadian-based Centre for International Governance Innovation, China is

“looking for an opportunity to better present their views by linking the issue of increased contributions to the IMF to the pre-condition of increasing the voices of the developing nations.”

Nevertheless, Beijing is not on the wining side. Deceiving could mean collapse, and China won’t just let European economies to collapse. This is a weakness in their strategy not so easy to hide and that might ultimately push China to contribute to Europe’s rescue without getting what it wants in return. Well, at least in the short term. One must remember Sun Tzu’s lesson: they might be near while making the enemy believe they are far away.