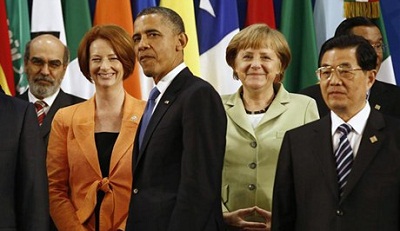 MADRID | The relaxed atmosphere in a seaside resort has undoubtedly helped coming to terms with a number of common sense goals. But delivery might prove more gruelling than expected. You don’t need to cross the Atlantic and be lectured by President Obama to concede that unwinding the feedback between financial and sovereign risks stands as a key requirement. Or to accept that current Spanish and Italian risk premium should be brought down the sooner the better.

Getting to grips with these problems certainly involves a more demanding effort than simply voicing them. Take, for instance, the need to decouple banking crisis from public debt. If we take it to the line, it would mean depriving this sector of any government support even when confronted to rough times. Someone else would have to foot the bill any failure encompasses. Shareholders and creditors would be the most likely candidates to bear the brunt. So be it.

But applying such a solution in the deep 2009 financial crisis would have wiped out the financial system both in the UK and in the Continent. Under severely stressed conditions, resolution may prove so damaging as to justify extensive public intervention. Whether the onus falls on the European Central Bank or the rescue fund, mending the broken pieces would finally come as a burden for taxpayers.

You may try mutualising that risk to avoid linking banking problems with the country of residence. You only have to convince Germans to rescue an ailing foreign entitydating advicetrong>. Not an easy task by all means.

You may also try to put in place a buffer financed by banking clients. But putting aside substantial amounts of money in a precautionary deposit-guarantee could prove more onerous than tapping taxpayers money in distress situations. It will be far from easy to agree on a balanced formula. ECB supervision, early warning mechanism and preventive action would contribute to downsize the risk of extensive disruption. But it would not prevent a full scale crisis from wreaking havoc on public finances.

Let’s turn now to the wishful thinking that markets can be tamed thus reducing sovereign bonds volatility. The European Financial Stability Fund already does envisage intervention both in primary and secondary markets. But no country has resorted to this facility as its conditions do not greatly differ from a full-fledged rescue without the benefits linked to be disposed of confronting the markets to raise money. Applying for it amounts to an open recognition that you are unable to get resources on your own, thus triggering immediate suspicions on the sustainability of your public finances.

Moreover, both EFSF and European Stability Mechanism are equipped with ample coffers. But the scale of their resources is far from being the big bazooka capable to match any challenge. So markets would be tempted to test their resilience, denting in the long run their ability to act as effective firewalls. Only the ECB can manage unlimited backing and cut short any speculative bout. Yet, monetising debt stands as a red line anathema Germany will staunchly resist to cross. Don’t count on that for solving the euro zone misfortunes.