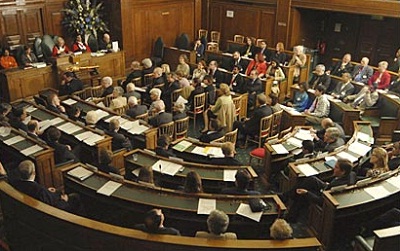 LONDON | Calls for further fiscal integration of the euro country members come extremely timely. Besides, they tackle the heart of the absurd problem that has been drowning since its foundation the common currency area a little bit deeper every day: utter disorganisation.

The same goes for the banking union and budget authority. But these grand advances in the euro zone’s structures will need time and some effective communication strategy before they resonate with most Europeans. How about accompanying the great transformations of the monetary union with some easy-to-follow measures of immediate impact, too? Certain little amendments at ground level would bring urgent improvements to our European democracies while sending a clear message on the new phase we are bound to enter.

Take what the British secretary for Communities and Local Government Eric Pickles did Wednesday as an example. Pickles announced his department is publishing all spending items from today when they involve more than £250.

It has during the last two years done so with goods and services costing over £500, and now the threshold has been lowered to a territory in which travel expenses and mobile phone bills could also be revealed.

In fact, Downing Street’s transparency code for councils had already seen all local authorities publish their spending over £500 online and open business up to public scrutiny including tenders, contracts, senior pay, councillor expenses and voluntary sector funding. The Localism Act requires local authorities to be transparent about how senior salaries are set through the publication of annual pay statements.

The secretary’s latest move goes beyond those already admirable standards and is simple. The political argument is voter-pleasing in the correct way (unlike others of him, linking poverty and crime):

“I firmly believe the more open we are about spending the more we can root out waste, avoid duplication and increase value for money for taxpayers,” Pickles explained.

“Every member of the public has a right to know, and a right to challenge, how every penny of their hard earned cash is being spent by government.”

The contrast is stark, even painful, with the secrecy and troubled management of the public resources by some local and regional authorities in, let’s say, some of the peripheral euro States.

Unfortunately, the idiosyncratic isolationism of the UK political establishment will prevent to a large extent the public opinion in continental EU to read many headlines about the Pickles scheme and put pressure on their own councillors to follow suit. There is no excuse for Brussels to pay more attention to Anglo-Saxon politics, though, instead of the usual exchange of misunderstandings.