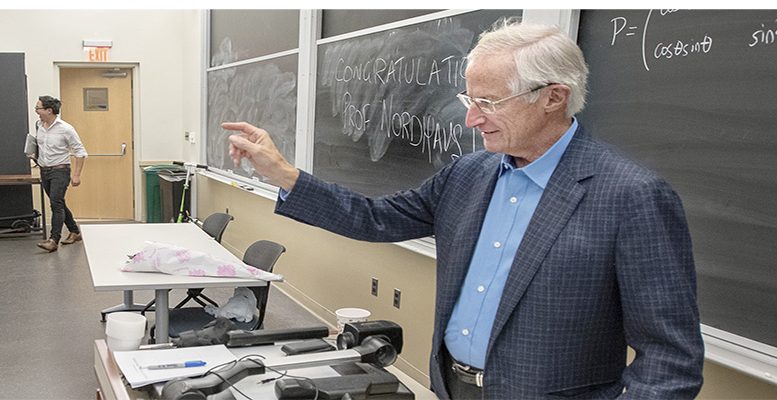 “The climate is changing more in half an hour than it has changed in decades”, said William Nordhaus, Nobel laureate for economics in 2018. He concluded that “If we had not spoken about climate change, nobody would have noticed it had happened.”

Nordhaus’ observation is surprising. After all, he won the Nobel Prize in October for his work on climate change. This 77 year old economist is a pioneer in measuring the economic impact of the so-called “greenhouse effect”, a line of investigation which he began to develop in 1975 with his then research assistant Paul Krugman, now also a Nobel laureate and New York Times columnist. Nordhaus, despite his apparent calmness, is the main defender of the Pigovian tax (in other words, inspired by the British economist Arthur Pigou) which taxes CO2 emissions and other gases which provoke climate change.

You are very pessimistic about the fight against climate change?

Yes. Europe is making progress, but Europe is a relatively small part of the global economy and, moreover, its role in emissions is limited. In China, there policy is still not clear, although it appears that they are moving in the right direction. And in the US we are moving backwards.

Why have all the agreements – Kyoto, Paris – failed?

Because not complying with the emissions agreements has no consequences. It should be like trade. Why do countries not enforce trade agreements more often? Because they are afraid of reprisals. Then there is another problem: for me, point one, two, three, four and five in this area is increasing the cost of emissions. Or a tax. That is how we can create a system which discourages emissions, which creates a clear legal framework, and which allows stable fiscal incomes for governments, which, in turn, can reduce the fiscal pressure in other areas of the economy because this new source of income. What I don’t like are subsidies.

Firstly, because they create distortions and inefficiency. In the US we have subsidised corn ethanol. But the ethanol has to be mixed with gasoline, and that is an industrial process. It has to be transported, which creates further emissions. Before, the corn is harvested through agricultural industry systems, in which they use machinery fuelled by fossil fuels. In the end they end up generating as many emissions as in the beginning.

Not to mention the enormous transfer of income from urban areas to agricultural areas, where the corn is cultivated, and which then vote for Republican candidates who say, precisely, that they are going to cut public spending.

This was more of a problem before. Now these subsidies have been much reduced. If there are subsidies, what is subsidised? Do we give subsidies to renewable energy? If so, to which ones? To the bicycle industry? To the shoe industry, because people who walk don’t use cars?

You have been President of the American Association of Economists, a position now held by the former senior economist at the IMF, Olivier Blanchard, and which afterwards goes to Ben Bernanke. 10 years have passed since the financial crisis. From your perspective, to what extent were economists to blame?

Well, first we know that in the US there is a decline in confidence in institutions. This is something that has been happening for some time and, given that Donald Trump bases his politics on denigrating institutions, the process has accelerated. I think Obama was a good president. But not the one we have got now. This is part of the debate, because if you denigrate institutions, you denigrate academic institutions, to which many economists belong, to which we belong, you denigrate think tanks, and also parts of government, like the Federal Reserve. The other question relates to the ethics …

Another question? What do you mean?

I believe that there were serious problems before the crisis. Researchers were, to put it politely, ambiguous and did not make clear their conflicts of interest like, for example, being consultants to private financial institutions who had an economic interest in the result of the research. I think that this is something we have improved. Today we have guaranteed that in scientific journals conflicts of interest are not concealed. And then there is the political element. Republicans didn’t like Obama’s policies because he was a Democrat. And from that came their rejection of his economic stimulus package and the Federal Reserve’s monetary policy. But I think that this is a political position, supported, in part, by ignorance. I am certain that many republicans in Congress don’t know how the Federal Reserve functions.

Another element is what your Harvard colleague Dani Rodrick calls “mathiness”, which comes from the exaggerated use of mathematical models to explain everything, to thus have the appearance of scientific rigour.

Well… Do you want to return to the 1930s, when there was no econometrics and the economists could offer no advice on fiscal or monetary policy? In the last crisis the economists could offer ideas, say things like that, when interest rates are at zero, you have to use fiscal policy to stimulate the economy. This doesn´t mean that they listened to us. In Europe, for example, they pretty much ignored us. But this is a major idea in macroeconomics. Obama´s people listened. And it worked. Not every one in economics is obsessed with mathematics and Econometrics. But mathematics is an excellent tool.