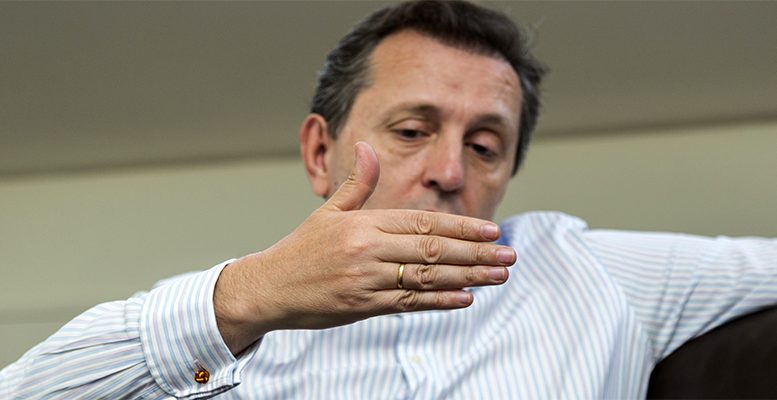 Fernando Rodríguez | Javier Cremades is chairman of The Spanish Association for Minority Shareholders of Listed Companies (AEMEC). The association probably represents the most important group of former Popular shareholders on the map of litigants which seems to be being formed. Cremades gives his view on this case and on other issues like the divided image foreign investors have of Spain.

Q: This week we’ve found out that one of Banco Popular’s former international shareholders is going to file a suit against the bank, requesting international arbitration. Is it possible to make a valuation of Popular which is different from the one euro Banco Santander paid for it?

A: It has to happen. It’s fundamental that shareholders’ rights should not be destroyed. The day before the intervention, Popular was worth 1.4 billion euros, and when Sr. Saracho arrived to head up the bank, it was worth 5 billion euros. I don’t know what the price is. But the courts have to offer shareholders a fair price.

Q: Will there be some form of expert opinion given on Popular sooner or later?

A: There are two ways of compensating shareholders for damages. One is via the European courts and the other is via the criminal courts in Spain. The European Court of Justice will be the one to establish the fair price, because the damage is now irreversible and shareholders want compensation. And the bank is not going to give them it back. The other way turns the spotlight on who are responsible for allowing the bank to get to this illiquid situation. There will be an investigation and people will be held to account: the board members, the chairman, the auditors…they are all subject to a responsability control.

Q: How do you think all the lawsuits around Popular are going to end up? What is the best way and the most appropriate legal proposition to ensure shareholders are successful?

A: Both ways. The most important is the European. What has taken the shareholders out of the game is the confiscation, the regulatory action of intervention. It’s a natural way. But also the other one. From the June 7 intervention, and after that date, it’s one thing. And then there’s what happened before the intervention. There may also be individual and corporate responsabilities…natural and legal persons who have been operating, in my view, against the law.

Q: And who do you think these are?

A: The main responsability lies with Sr. Saracho. He was the one who was at the helm of the bank when it exploded on the European mountain. I believe we will soon have proof that every statement he made was having an adverse affect on the interests of society, draining away massive amounts of funds and liquidity. The chairman is the one who should manage client confidence: if he gives out messages which spread panic amongst clients, then he is hurting the bank. The bank was losing client deposits.

Q: What is the degree of Spain’s minority shareholders’ mobilisation compared with the European standard?

A: A lot lower than in Denmark, Holland, the UK and Germany, but higher than in countries like Italy or in the Baltic region. Unfortunately, the minority shareholder in Spain only mobilises when there is a crisis: Abengoa, Popular, La Seda…But a distinction needs to be made between the private minority shareholder and the institutional one: the professional, who increasingly wants to become more involved and depends more on ‘proxy advisors’.

Q: Is the Spanish stock market as immature as it seems to be in these matters?

A: The reality is that it’s not very mature. The first US stock market law was introduced 200 years ago; the current one, 100 years ago; and that related to financial litigation is our daily bread. Here in Spain, the supervisor arrives late on the scene of any crisis, it doesn’t know what is going on. In the banking sector, which is super-regulated, we have had 3 or 4 serious incidents, which have hurt many. Spain has been the epicentre of the biggest global financial incidents along with the US: Madoff had two sources, New York and Madrid; Bankia – a lender which we now know was bankrupt and made its debut on the stock market –; Pescanova – full of institutional investors -; Gowex, a pyramid swindle which was discovered by a foreign activist; Banco Popular…All this will allow us to learn some lessons. This market adolescence requires time.

Q: Your lawyer’s firm -Cremades&Calvo-Sotelo- works with clients in other parts of the world. What do foreign investors think about this paradox in Spain…that it has an economy which is interesting to invest in, but there are sometime exceptional risks, and it has a legal framework which is not very stable, is inefficient and not very transparent?

A: It has cost Mr. Luksics (former Popular shareholder) 100 million dollars to find out that investing in Spain is dangerous. Spain is a motorway where you can go very fast, but there are too many fatal accidents. They keep coming, but there is no reason for us to put such a high cost on life. Putting it another way, this legal uncertainty has a cost: we would have much more investment if there was more security in Spain and conflicts were resolved more quickly and more efficiently. We have taken 5 years to deal with the Bankia case, while a sentence was handed down on the Madoff case after 18 months in the US.