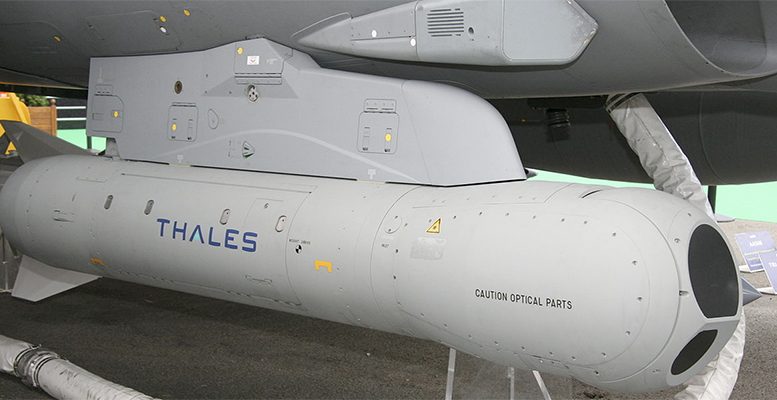 After the military welcome that Macron offered Trump last week on the Champs Elysees, it seems appropiate to examine closely French new government resolutions in terms of military spending, and more specifically their plans for one of France defense crown jewel Thales. Prime Minister Edouard Philippe has confirmed that the defense budget would see cuts of about $968 million in 2017. However, he has also committed to a further military spending plan for 2018 which will eventually bring defence spending to the 2% threshold required by NATO by 2025 against a current 1.77% ($55.7bn spent in 2016).  In this sense, Carax- Alphavalue starts by wondering if the 26% stake in Thales owned by the French state is on the block.

“Yes, if one considers the intention of the new government to fund investments in new industries; No, as Thales is strategic to both Dassault (a client and a 25% shareholder) and the French government. We argued before that a golden share could make the trick of retaining a strategic say but there has been pretty little noise in government circles about such a move.”

The good news though is that the situation at the head of the company seems to have stabilised since the arrival of Patrice Caine as CEO in 2014, despite job cuts and continuous reorganisations. Whatever the speculative background, Thales surfs on a defence upcycle that justifies sticking to the share with a 20% upside.

The defense budget uprise that Prime Minister Edouard Philippe announced by 2018 represents an incremental spending of about $40bn over the period. This should benefit Airbus  and its A400M, but also Safran and its military engines. As the main supplier of the Dassault Rafale jet (25% of components from Thales) and other key defence products, Thales benefits most. It supplied the French armies in 2016 with gear worth €1.5bn. In addition, through its 35% share of Naval Group (the new marketing moniker of DCNS), it participates in the €1.4bn worth of equipment that the Naval Group provides.

Being the specialist of “gathering, processing and delivering clear information in a requiring environment”, as said by Carax- Alphavalue, Thales structures its strategy around four key pillars: Connectivity, Big data, Artificial intelligence and Cyber-security. Experts explain:

No big surprise there but a confirmation that Thales is ever more focused on the soft side of military products. Most of its R&D efforts are focused on these pillars as are recent acquisitions. Unsurprisingly as well, such technologies, could be deployed in both civil and military markets. Drones, air traffic monitoring and secured communication networks are essential in preventing inland civil threats. While radar, combat systems and optronics are essential military know-how that benefit from increasing defence spending by emerging countries. For mature countries, here defence spending is likely to rise to the 2% of GDP target set by NATO anyway.

On its way to becoming a cash machine?

The current management has been behind a strong operational performance since 2015 with a very satisfactory operating cash flow conversion, at last now standing above adjusted net profit. This has enabled Thales to increase its payout ratio since 2014 to a quite high 38% in 2016 without impeding its acquisition strategy, an essential feature of Thales’ good showing. The only activity that still stands out like a sore thumb compared to other well-oiled ones is the Transport one, which remains impacted by negative margin contracts.

With the prop of premia added to peer multiples (to account for the strong impact of Rafale fighter sales on mid- and near-term profits), Thales remains one of analysts sector favourites with a significant 19% upside.