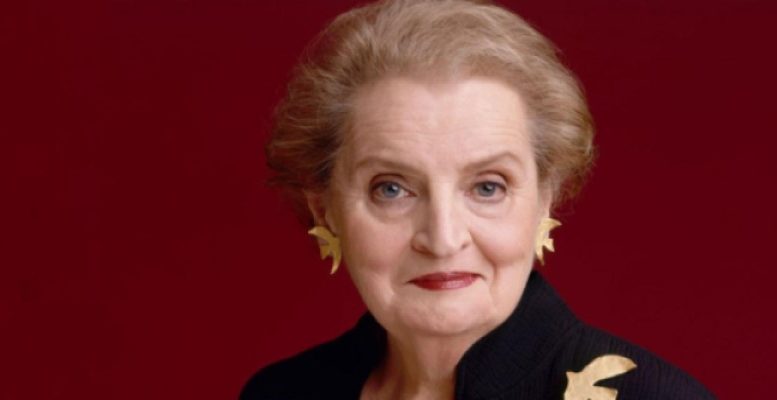 Albright knows about fascism. Her real name is Marie Jana Korbelová. She was born in Czechoslovakia and two dozen of her relatives were killed in the Nazi concentration camps because they were Jews. Albright herself took refuge with her parents first in the UK then in the US. Brought up a catholic, she didn´t know her own identity until the Washington Post published an investigation into her origins in 1997.

She was the first female US Secretary of State when Bill Clinton appointed her in 1997. In 2001 she retired from the front line of politics and founded, first, an equity fund and then an equity management company and a consultant, ASG, which supports the internationalisation of US companies. But Madeleine Albright has never really left the public sphere.

Today she has returned, at the age of 81, with “Fascism: A Threat”, which is published in Spain by Taurus, and in which she analyses a series of countries – from Erdogan´s Turkey to Orban´s Hungary, passing by, subtly, Trump´s USA – in which, in her opinion, can be seen a growing trend in global politics.

In your book, you say that, for fascism to happen, there must be a certain connivance or indifference among the elite. In the US it appears that the elite is relatively satisfied with Donald Trump, and what he is doing is of little importance to them, as long as the stock market keeps rising. The same happens in Europe with governments like that of Viktor Orbán in Hungary. It doesn´t seem that the political or economic elite is behaving very responsibly. It it an elite or an oligarchy?

First of all: I think that Donald Trump is the worst US president in the modern epoch, but I don’t think he is a fascist. Second, I don’t see an oligarchy like that in Russia or in the ex-soviet republics taking root in Europe. But it is true that there is a disconnection between different economic events. And it is a disconnection that I, to be honest, don’t understand. For example, how is it possible that the stock market is beating records at the same time that people complain that their wages aren’t enough and the data shows that disposable income has stagnated? For me this s completely incomprehensible. Evidently I am not an expert in economics, but I have seen no data that shows that Donald Trump´s tax cuts, which came into force in January, have raised real wages. On the contrary. What I have seen is that only company profits and capital returns have benefited.

Have you seen the Bloomberg graphic, that was popular this summer, in which you can see that after the tax cut wages have not risen, but company profit have?

Yes. And again, although I am not an expert, not in the least, for me this raises the question of how long this situation can be sustainable, to what extent company profits can increase at the expense of wages. At some point, I think, there must be an inversion point.

And this inequality also aggravates the sense of society fragmentation. Which in its turn creates competition between groups to get access to an economic status which each day is harder for them to achieve. And that is one of the keys to the success of authoritarian and fascist systems: the appearance of a leader who promises to protect the people.
As you’ve just said, the relations between the US and its European allies are deteriorating. But at the same time, the situation inside the EU is also worsening. It is not just Hungary or Poland, to whom you dedicate chapters in your book. It is also Brexit and, now, Italy.

This is a book which proceeds in part from the experience of my family, and from which I saw what nationalism and fascism did to real people and real countries. Thus it could be said that I am a daughter of the Second World War. But I am also conscious of what the Second World War achieved, albeit indirectly. I am referring to when, after the war, the European Coal and Steel Community was created, which expanded into a Europe whose countries have more in common than what separates them. It is a historic change which now is beginning to be lost, fundamentally for economic reasons.

What is the debate in Europe that most concerns you?

I think that the main question in Europe is how much the North of Europe should pay to the south. A second factor is the idea that there is an unelected technocratic bureaucracy in Brussels which id controlling the life of the citizens. And the result is that it is difficult to know where Europe is going at the moment, with Brexit, with the immigrants, with so many things which are threatening it and alienating it from its initial plan.

Suddenly you are sounding very Republican. If you replace “north” with “creators of employment”, “south” with “receivers of social benefits” and “Brussels” with “Washington”, you could be confused with an advisor to Trump.

No. My big difference with the Trump government is that I am a great supporter of the EU and I have never seen it as instrument of domination by some countries over other countries. [Trump has said various times that the euro was created for Germany to benefit at the expense of other countries]. I believe that the EU has functioned well until now. But the circumstances have changed. Nothing has been the same in the EU since the Euro crisis and, therefore, to seek a return to the old system is unrealistic. And to that have been added new factors like Brexit, immigration … I have to say that I feel … I don’t know if it’s shocked or depressed by how the Europeans in the North speak about those in the South. Things like: “why do we have to transfer money to those layabout Greeks, to the people in that country who don’t pay their taxes”. The genius of the EU is being undermined by the struggle between globalisation and identity. And, of course, it is a fight that the Euro crisis exacerbated.