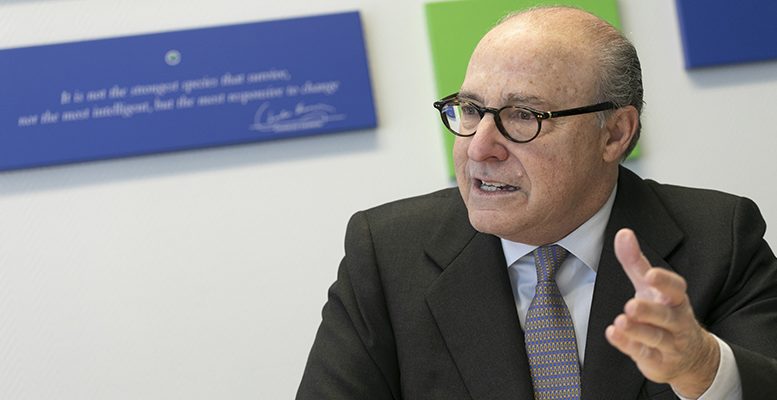 Fernando G. Urbaneja | Chairman of the Círculo de Empresarios (Business Round Table in Spain ), John de Zulueta is an experienced member of the Board of Directors of various international firms. From his managerial post as President of the Sanitas Group (BUPA Group), he turned the company into the leader of its market. He is also Vice-President of the Innovation Bankinter Foundation and was member of the Advisory Council of 3i Europe. He spoke to us about how to fix Spain’s labour market (unemployment rate is 14.7%, according to April 25th data), where there are currently “135,000 technological jobs vacant which cannot find the people to fill them.”

Q.- What should be the priority for Spanish economic policy?

The urgent problem is unemployment; there is no excuse for not solving it. We need to lower it to 5%; it is a possible and reasonable target. We would ñoberate 26 billion euros among lower unemployment payments and higher social security contributions, without taking into account the impact on consumption and the tax take. This should be the priority for any government: to reduce unemployment effectively. Also education reform, which is more long term: more professional education, more dual education and more technological education.

At the moment we have 135,000 technological jobs vacant which cannot find the people to fill them. Universities are not thinking about the labour market. In the countries where employment functions best, governments finance the universities to promote R&D; the universities teach the new technologies so that their students create new companies and risk capital funds invest in these companies. This is the virtuous circle of employment and competitivity; new technologies, more innovative and more productive. Spain is very behind in this; Europe too.

We are doing badly in global competitivity. Spain appears in place 26, when we should be top 14. We are worse in the efficiency of the regulatory framework, in place 89; and ease of creating a new company (place 81). These are disappointing data which must be improved urgently. We do not have company leaders, there are no European companies among the top ten by stock market capitalisation: there are 8 US companies and two Chinese, many of these technological companies. The European Commission should not block the merger between Siemens and Alstom; we need more global stars, and not just national champions. Spain is not innovating when we need jobs which require technological skills and capacities which we do not have and which we do not import from other countries.

Q.- The debate is growing over the risks of inequality… the dilemma between equity and efficiency is being questioned, which should not be incompatible objectives. In short, another frontier for capitalism …

We need humanist companies to avoid social confrontation, to overcome the tensions between the haves and have-nots, to avoid sharpening the differences. We need to prevent the populism which is fed by social confrontation. We need to revise Friedman, who maintained that the only thing that matters is company profits, so that the shareholders can then do what they want, including charity. The modern narrative is different, today it should be “antifriedman”: the company has responsibilities to its community, in addition to making profits it should contribute to community projects where it operates. For example, it should pay attention with sensitivity and coherence to the ratio between what its top executives earn and the average wage. In Spain today this is 100:1, in the US it is much higher. This is not good; it has exploded in recent decades. When I began in a company these differences were much smaller.

Q.- The reputation of companies, especially banks, is at rock bottom

The banks indeed appear as the baddies in the movie, and have not known how to react. They committed mistakes, for example the “floor clauses”. But now much more transparency is demanded. There is a lack of communication, especially banks, who have perhaps been arrogant and careless. Now we know what commissions we pay, there is competition and the client has rights, is better protected. Banking is a critical sector, key for how the economy functions, which is why is a sector to which we must be demanding, but we must also value it for its essential role in the functioning of markets.

Q.- It´s not just banking, industry and companies in general also have reputation problems…
The Círculo is working in improving this reputation. But companies have to change, improve, explain themselves, educate … Companies are afraid of expressing their views, they over-respect governments, they see what depends on them. This is not the American model, much more demanding of its government.

Q.- How do you think that the separatist conflict influences the economy of Catalonia and the rest of Spain?
The conflict has caused the departure of the headquarters of 5,500 companies and the diversion of much foreign investment to Madrid. In the end it will contribute to the weakening of the Catalan economy, as happened in Quebec after the separatists lost two referenda. As Catalonia represents around 20% of Spanish GDP, in the end we will all lose. The future of Spain depends on a united country in a united Europe.