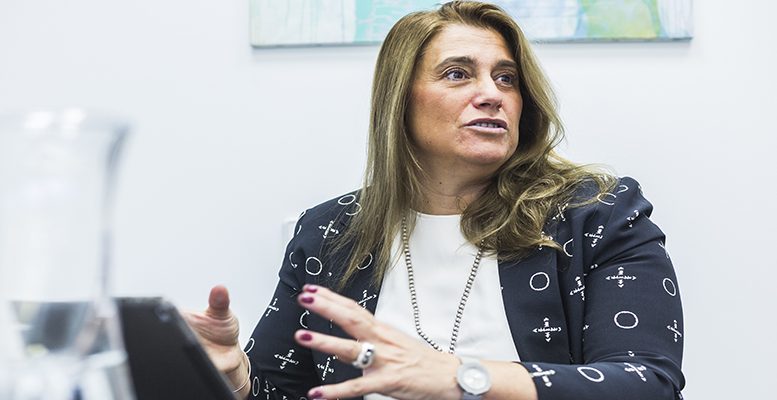 Fernando Rodríguez | “Very few people really know what REE does, except that, erroneously, it “belongs to the State”(…) Our foreign investors now account for 75% of the total (…) The system works, and works very well.The price of our electricity may be a little higher than in Europe – not much higher – but we need to be aware of some of determining factors such as very complicated physical conditions.” Who speaks is Socorro Fernández Larrea, Red Eléctrica de España Board member.

Q: The majority of REE’s investors are foreign, more than two-thirds…JP Morgan and Goldman Sachs have warned about the effects on REE of the uncertainty in Catalonia, where it has 15-20% of its assets. Also about the energy sector regulatory debate, which they estimate will extend until 2019. What is your view?

A: In principal, it can be a cause of some concern to have part of your network in a region where there is political uncertainty. But our electricity system is a unique network which includes Portugal as well as Spain. So it would be difficult for somebody to do anything in a unilateral way to the network in Catalonia, amongst other things because it would be the first region to end up without any supply. In any event, REE has a contingency plan for any kind of failure in the network and, fortunately, Spain has a lot of installed capacity…What and investor wants is certainty, and even more so one which has a company like REE. So it’s important for both the EU and the Government to have made things clear. There is a ongoing relationship with shareholders and what is going on is explained to them.

Q: And the regulatory risk?

A: It’s always there. Every regulated market has it. To offset this, a decision was taken to diversify REE’s activity so that shareholders always had an interesting remuneration. Our diversification has been two-fold: internationalising the business and getting into telecommunications. Going back to the issue of the judicial framework, it would be desirable if it didn’t change so much because investments are made with a very long horizon and certainty is vital. Our investors remain in REE for long periods and the rules can’t be continually changed. Sometimes those which are easier to control are changed, not so much the global system regulations. In any event, we now have a stable framework where there are just a few points which need to be clarified.

Q: What has to be done to make the market more stable in this sense?

A: It’s an issue for the State. There needs to be a clear consensus on the energy issue so that the framework does not change and long-term plans can be made. Our competitiveness, and that of our economy, depends on that.

Q: Paradoxically, the EU has warned the Spanish government about the 5% limit on capital and 3% limit on voting rights which any investor can hold in REE. Is this not a bit of an anachronism?

A: We are talking about a strategic infrastructure; it’s very easy to control a country if you control its electricity supply. The State has to ensure there is no dominant investor in REE. Furthemore, it’s fundamental to guarantee the neutrality of the single operator, maintaining its independence with respect to the producers and distributors. Spain’s TSO model is the same as in the majority of countries in Europe. And in fact these TSOs are grouped on a European level. The tendency is towards a single market, guaranteeing the lowest possible price throughout the region, because that’s what allows us to be more competitive. On the other hand, the EU is very much on top of companies like ours to avoid there being any positions of control which block transparency and voting. The majority of REE’s board members are independent. Our appointments are voted on at the AGM by shareholders with a free-float of 80%, of which 90% are foreign investors who now account for 75% of the total.

Q: In spite of everything, it seems that international infrastructure funds are beating investment records in Spain’s energy market, particularly via asset rotation. What do they value the most? I imagine it won’t be the legal stability or the market’s efficiency…

A: They value future and potential. They know Spaniards are capable of the worst and the best. As we have already gone through the worst, the best is now to come. Just like when the vulture funds came in at the peak of the crisis, now everyone hopes to take advantage of a time of necessary growth. At the start of the crisis, they wanted to convince us Spain was the champion of infrastructure and that everything was already done. But this is not true and the funds know that. And they also know that if it’s not done via private iniatives , nothing will be done in this area. There is practically no public investment.

Q: Jorge Fabra, the first chairman of REE and the chairman of the National Energy Commission (CNE) said a short time ago that the Spanish electricity market should be eliminated and we should start from scratch. What do you see and the good and bad aspects of the current market? Don’t you think that it suffers from a lack of stability and an excess of temporary legal remedies?

A: The first good thing is that the system works, and works very well, but we are not aware of how important this is; we have got used to it, we think it’s normal that there are no blackouts, there is always supply and nothing goes wrong. The price of our electricity may be a little higher than in Europe – not much higher – but we need to be aware of some of determining factors, in some cases predetermined. For example, we live in a country with very complicated physical conditions: very mountainous, with low levels of rainfall and without any fast-flowing rivers, extensive and disperse…And others which we impose on ourselves: we don’t want nuclear, which is very cheap source of energy, and we have made a bet on renewables.

But in order to be the pioneers in this type of generation, we have had to pay the price for the learning curve. So our already installed photovoltaic plants or wind farms are not as efficient and productive as those now on offer in the market. Furthermore, as we are talking about an energy which is not manageable – we can’t match supply with demand – we need to have greater installed capacity in other sources of generation to ensure that there is always supply. And in spite of everything, we are an example of efficiency because we have very low indices of unsupplied energy. What doesn’t work so well is the didactic part: nobody has any idea and nobody has taken the time to explain all these questions. Very few people really know what REE does, expect that, erroneously, it “belongs to the State”.