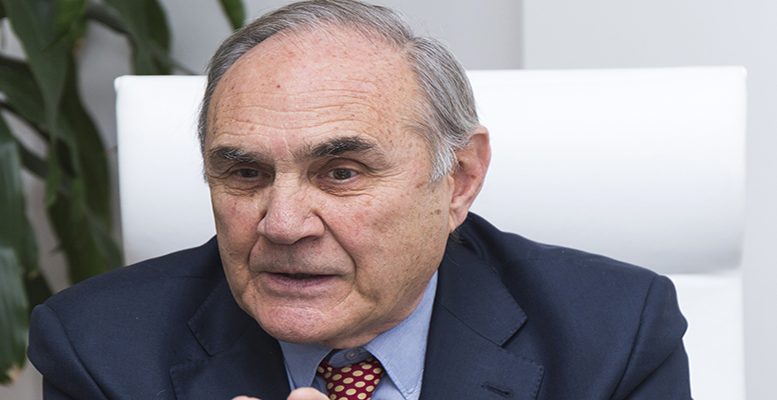 At the end of the 1990s and after 25 years in the public sector, Julián García Valverde founded Imathia and Consultrans, engineering, consultancy and construction companies. They form part of the consortium of 12 Spanish firms which won the contract for Mecca-Medina AVE high-speed train line. On December 31, the “pilgrims’ Ave” crossed the 453 kms which separate Medina from Mecca, at 300 km/hour in some parts. The companies next goal is the Egyptian high-speed train project. For the time being, the consortium which they have put forward has been the highest qualified. So they are well situated in poll position. They are the only Spanish companies.

Q: After the train’s first journey on the last day of 2017, can you say “mission accomplished”?

A: More than 90% of the work contracted is already completed. The 453 kms from Medina to Mecca is finished; between Medina and KAEC the trains arrive from one to another point on the line. The other part up until Mecca is not yet completed because the stations aren’t, which are the responsability of two Saudi companies. They do not form part of our consortium and have not completed their work. The trains have made the journey in under thee hours and our aim is to do it in a little over two. The train was running at 300 km/hour in some parts at the end of last year. This means that the project is completed, but not fully operative. We won’t operate the line, which represents almost half of the budget, until maximum security conditions are satisfied. We are still waiting for the stations to be completed and for the signals to work perfectly, which is the responsability of our consortium. We don’t want to sell tickets until the project is 100% trustworthy.

Q: What does the client have to say about the delay this demand brings with it?

A: We understand the political urgency of the project for the client, who wants to operate the line this year. But the security is indispensable and with high-speed trains this is a key aspect, and very sophisticated. We know that it’s more than just a country project, it’s a “religious project”, a priority for Saudi Arabia and it will not be renounced. The recent declines in crude prices and the cut in revenues they meant for the government forced them to delay a good part of their investment projects. But not this one, for which the money has been assigned; they have never not paid, even though there has been some delay. Now we have to convince them that the signalling is delicate and very demanding. For that reason, it’s very important to operate the line before the summer. And we have to satisfy them and guarantee that it will function correctly, with phased increases in the frequencies. I am optimistic the consortium will comply and ensure that the signalling works perfectly and be finished on time.

Q: Your consortium is also the most interested in ensuring that the line works well as it will operate for at least 12 years

A: Yes, we are effectively the ones who are very interested, given that all the partners (except for OHL) are involved in the maintenance and operation of the line for the next 12 years. Around 3 billion euros of the 6.7 billion contract are for the maintenance and operation of the trains and the stations. We are the ones who are most interested in selling tickets, but also in ensuring that everything works with maximum efficiency and quality.

Q: It’s going to be a very busy line

A: It’s not a commercial train line, but one planned to satisfy the demand of the pilgrims who go to Mecca. It will have permanent users, but peak periods with millions of travellers. At the moment, the journeys are made by plane or bus. With the high-speed train, the pilgrims will be more comfortable and it will cost less. During the heaviest traffic periods, trains will run every five minutes. The Kingdom of Saudi Arabia is risking its prestige with the believers.

Q: And the prestige for the consortium which has built and will operate the line. Will it gain more prestige than money?

A: We are not going to lose money, although we won’t make as much as we estimated. The delays have hurt us, and although the responsability lay with third parties, we have not received any compensation. But the prestige effect is clear, this project gives those of us participating in it “references”. And there’s an effect on the sector, for the Spanish railway industry. As a result of this contract, Alstom has lost position, while Talgo has gained. We have presented a project in Egypt with a consortium for a possible contract and we have possibilities.

Q: I suppose the contract brought opportunities and risks…

A: One of the good point about the contract was that it was financed by the client. Each certification is paid for reasonably punctually. Without this guarantee it would have been impossible to present an offer, especially because it was 2010, the most complicated time for getting funding. Being able to present collateral was critical, 10% of the budget as a guarantee and another 10% up front, over 1.3 billion euros, a very significant figure. We were backed by a consortium of banks and CESCE, in one of its biggest operations. One of the weak points of the project was that we depended on the other consortia who were awarded the contracts for Phases I and II, the infrastructure and the stations, which in fact have still not been completed and delivered. We are victims of these delays, which means we have not met deadlines with costs rising which the client has not acknowledged.

Q: There also seems to have been internal problems?

A: The work began in 2013 with a problem which was foreseeable due to the size of the consortium: 12 partners and the two local firms. Although that was also an advantage, we had a replacement for everything. Three construction firms, OHL, Copasa and Imathia, where the relationship was not always an easy one, but which benefited the consortium: we controlled ourselves via positive competition. You have to bear in mind that our work doesn’t finish when we hand over the line: we need to operate it and maintain it for 12 years. So we are particularly interested in the quality and effectiveness of this railway line. For the electrification work we had three companies, Cobra, Inabensa and Guinovart-OHL who also competed. We just had one partner in the signalling work: Dimetronic, a firm which Siemens later bought. And Talgo for the trains.