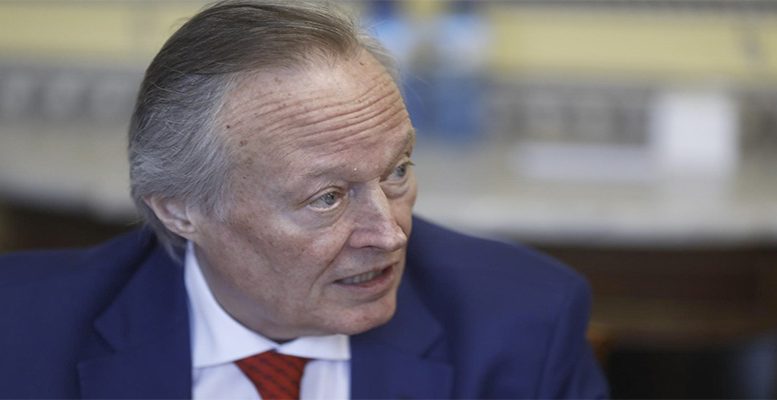 Ana Fuentes | “The European project is suffering an identity crisis” affirms Josep Piqué, former Foreign Minister who now sits on the boards of Abengoa and Seat. “If Europe loses solidarity, it disappears as a political subject. We are at this crossroads. We don’t lack ideas, we lack the leadership and political capacity to implement them.”

We recently interviewed Nassim Taleb in The Corner. He said on the one hand that much business in Spain remains opaque and the capture of incomes, and on the other that its is not based on the creation of value. You have been in companies and also been Minister of Industry. Do you think he right?

I think he would have been more correct if he had said this a few years ago. These business models based on the control of information and a certain opacity have ever fewer chances of survival in a global world in which information flows in a completely tangible way and in real time. I think it is a description of Spain´s productive structure in the past. The Spanish productive structure is much more than this. And we also have to defend it because of our tendency as Spaniards to self-flagellation. We suffer a significant lack of self-esteem. It is no coincidence that we Spaniards have a lower opinion of ourselves than the rest of the world. Spain is much more than construction and the tourism of sun and sand as is sometimes said. Throughout the crisis, and before and after it, Spain´s share of global exports has increased and this is only possible if you have a competitive productive structure. We have done our homework much better than most people think.

And we remain a pro-European country, or not?

Yes, what we need is a strong government to be able to accompany French and German initiatives when they are possible. Today we have an obligation. It is often said that the most urgent is to wait. Well our obligation is to await the results of the elections to the European Parliament, more important than ever. Because for the first time it is possible that there might not be a clear pro-European majority in the Parliament.

In your last book you talk about a post-western world. Do you really think this will happen? Does a Europe without Merkel worry you?

I worry about a Europe without the German European commitment. Evidently Merkel represents this commitment, and will continue to represent it, but she has announced her retirement from German politics. She has been an important woman in European construction. What worries me more is what Germany´s position will be in the post-Merkel epoch.

Do you think Macron has what it takes to take the helm?

I prefer not to talk in personal terms, but rather about countries. And France is the second most important country in the EU, but does not have the strength itself to drive forward the European political project which at the moment is suffering an identity crisis. It can only do this with Germany. And Germany and France also need other countries to complement them in this effort. And the panorama now is not exactly encouraging because we have on one side we have the Visegrad countries who are completely unwilling to give up sovereignty having just recovered it after centuries of not having it or having it limited. We have an important group of Eurosceptic countries, traditionally the Nordic countries, but others have joined it who were traditionally pro-European like Holland, Austria or Ireland. And we have Italy, a founder member of the EU, which is adopting clearly Europhobe positions opposed to deepening the political project of European construction. From now on Spain must play a fundamental role.

To reinforce the European project cooperation in foreign, defence and trade policy has been suggested. But as soon as you start talking about sharing our responsibilities it crumbles away. And we haven’t started talking about the nub: fiscal union, Eurozone budget …

It is very important to start from an idea: this not the first time there have been efforts to unify Europe. There have been attempts in the past, but always by force, by the power that considered itself hegemonic at any moment. This is the first time in our history when European construction is being attempted through peace and solidarity, and equality among the different member states. What is missing is solidarity and, because there is no lack of ideas, there is a lack of the political capacity to implement them and a lack of solidarity at the point of an equitable distribution of effort. And if Europe loses solidarity it is going to disappear as a political subject. We are precisely in this crossroads. But we do not lack ideas: we know perfectly how to reinforce the governance of the Euro. And we know well how to implement a fiscal union, a banking union, a European budget or even a Ministry of Finance at a European level. There are also lots of ideas about how to implement the Europe of defence and security, and how to develop a common foreign policy, including security and defence. The principal problem is that at the moment there is no leadership and no political capacity. Neither in the European institutions or in the governments of the most important member states. When this is corrected we can start talking again about re-launching the European project.

In relation to countering the growing influence of Russia and China, it is already known that the Commission is working on a supervision mechanism for investments. Does a certain EU protectionism make sense?

Europe was born from the liberal international order and therefore with a political conception associated with the free circulation of goods and services, but also of capital and workers. And whatever restriction on one of these four freedoms puts at risk the very essence of the European political project. Therefore we have to be very careful and, from my point of view, restrained when applying protectionist mechanisms under the pretext of a safeguard strategy. The really strategic thing for Europe is that the values associated with the West are defended and safeguarded. I am talking about representative democracy in politics; about the economy of the free market based on private initiative in economics; in society and culture, about open societies that guarantee the liberty of the individual, equality, the rule of law, the separation of powers, the independence of the judiciary and of course respect for the law. And it is within the context of respect for the law that we must frame our reaction to foreign powers.