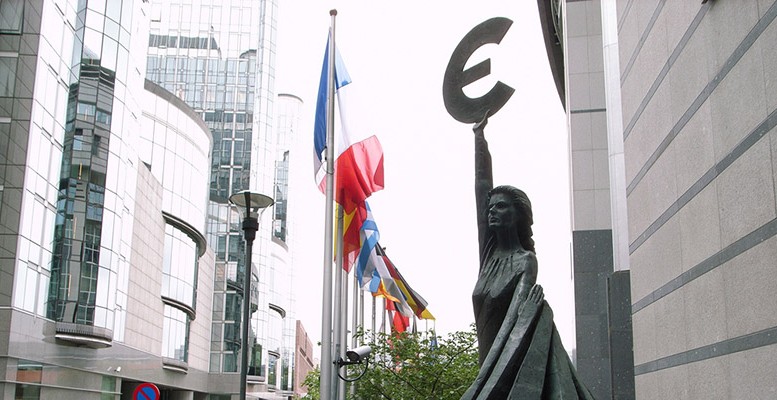 Francesco Saraceno | The EMU policy debate in the past few months kept revolving around monetary policy. Just this morning I read a Financial Times report on the never ending struggle between hawks and doves within the ECB. I am all for continued monetary stimulus. It cannot hurt. But there is only so much monetary policy can do in a liquidity trap. I said it many times in the past (I am in very good company, by the way), and nothing so far proved me wrong.

A useful reminder of how important fiscal policy is, and therefore of how criminal it is to willingly decide to give it up, comes from a recent piece from Blinder and Zandi, who tried to assess what the US GDP trajectory would have been, had the discretionary policy measures implemented since 2008 not been in place. I made a figure of their counterfactual: It is worth just using their own words:

Without the policy responses of late 2008 and early 2009, we estimate that:

The conclusion I draw is unequivocal: Blinder and Zandi give yet another proof that what made the current recession different from the tragedy of the 1930s it the swift and bold policy reaction.

This of course nothing new. But unfortunately, it sounds completely heretic in European policy circles. In my latest post (internet ages ago) I noticed that how little Mario Draghi’s position on fiscal matters differed from Angela Merkel’s, and in general from the European pre-crisis consensus.

The reader will have noticed that in the figure above I also drew EMU12 real GDP. It did not fall as much as the US no-policy counterfactual (among other things because exports kept us afloat thanks to…the US recovery). But we are today stuck in a semi-permanent state of stagnant growth. EMU12 GDP is today at the same level as the level the US would have had, had their policies been completely inertial. Once again, a visual aid: I already showed this figure in the past. On the x-axis you have the output gap, i.e. a measure of how deep in a recession the economy is. On the y-axis you have he fiscal impulse, i.e. a measure of discretionary fiscal policy (net of interest payment and of cyclical adjustment of government deficit). A well functioning fiscal policy would result in a negative correlation: If the economy goes down (negative output gap), fiscal policy is expansionary (positive fiscal impulse). This is what actually happened in 2008-2009 (red series). But then as we know European policy makers succumbed to the fairy tale of expansionary fiscal consolidations, and fiscal policy turned pro-cyclical (yellow series). A persisting output gap was met with fiscal consolidation (improvement in structural fiscal balance).

Overall, policy was neutral. This is consistent with the Berlin View, that  fears discretionary policies as if they were the plague. And explains much of our dismal performance. The fact that we are close to Blinder and Zandi’s “no-policy” scenario is no coincidence at all. Our policy makers should look at their blue line for the US, and realize that we could be around there too, if only they were less stubbornly ideological.