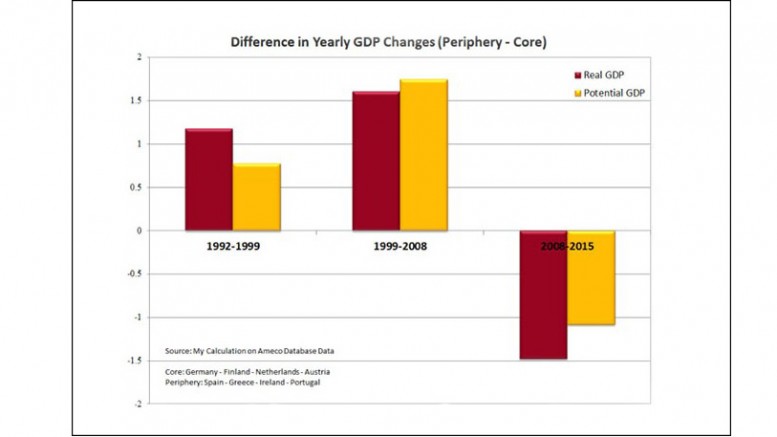 Francesco Saraceno | I computed real GDP of the periphery (Spain-Ireland-Portugal-Greece) and of the core (Germany-Netherlands-Austria-Finland), and then I took the difference of yearly growth rates in three subperiods  that correspond to the run-up to the single currency, to the euro “normal times”, and to the crisis.

Let’s focus on the red bar: until 2008 the periphery on average grew more than 1% faster than the core, a difference that was even larger during the debt (private and public) frenzy of the years 2000. Was that a problem? No. Convergence, or catch-up, is a standard feature of growth. Usually (but remember, exceptions are the rule in economics), poorer economies tend to grow faster because there are more opportunities for high productivity growth. So it is not inconceivable that growth in the periphery was consistently higher than in the core especially in a phase of increasing trade and financial integration;

We all know (now; and some knew even then) that this was unhealthy because imbalances were building up, which eventually led to the crisis. But it is important to realize that the problem were the imbalances, not necessarily faster growth. In fact, if we look at the yellow bar depicting the difference in potential growth, it shows the same pattern (I know, the concept of potential growth is unreliable. But hey, if it underlies fiscal rules, I have the right to graph it, right?).

The EMU in its current design lacks mechanisms capable of neutralizing pressure towards divergence. It was believed when the Maastricht Treaty was signed that markets alone would ensure convergence. It turns out (unsurprisingly, if you ask me) that markets not only did not ensure convergence. But they were actually a powerful force of divergence, first contributing to the buildup of imbalances, then by fleeing the periphery when trouble started.

Markets do not act as shock absorbers. It is as simple as that, really.