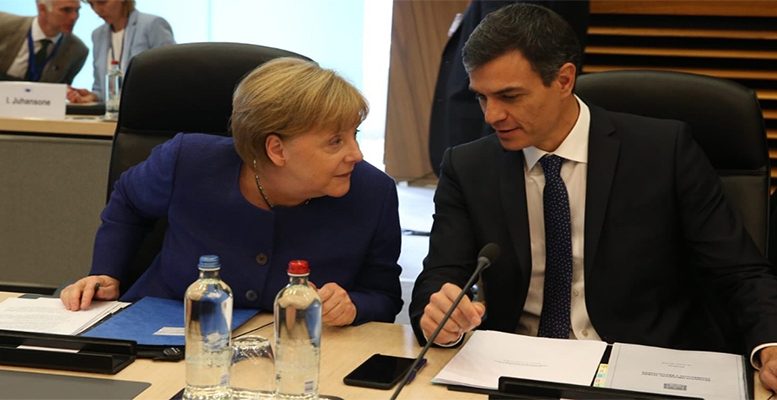 Angela Merkel and Pedro Sánchez at the EU Summit on immigration

The leaders of sixteen EU countries survived a mini summit with no results but with”frank talk” during an emergency meeting on immigration on Sunday and emerged with a veneer of common purpose. The EU enters now a potentially vital week for its unity with many in Brussels expressing the opinion that the current crisis has a destructive potential for the European Union.

During the meeting the participant head’s of state produced “a lot of good will” to resolve the differences of how to manage the immigration crisis.

Spanish Prime Minister Pedro Sanchez said that the talks were “frank and open”, but “we don’t have any concrete consequences or conclusion.”

The main tension of this meeting was between Italian Prime Minister Conte and France which insists that Italy keeps committed to the”cooperative approach.”

Angela Merkel and French President Emmanual Macron held out little hope that they would be able to gather all 28 nations behind a single immigration plan at the upcoming summit on Thursday.

Plans to set up migrant reception centers in Albania were also under discussion.

Informed sources in Brussels said that there is another plan, which is a Franco-Spanish one but no text was available. Paris-and Madrid want “closed disembarkation platforms” in closest safe ports to work ” on a cooperative basis with the region” as well as a procedure to vet asylum seeks from economic migrants.

The Frensh-Spanish idea is such that it will be based on European Union territory which could include the Spanish enclaves of Ceuta and Melilla on the other side of the Gibraltar straits.

Spain’s Prime Minister has urged his partners to help Spain deal with a growing number of arrivals across the Mediterranean sea. He accused Italy’s new populist government of being “anti European” in its immigration policies by putting national self interests ahead of efforts to forge a united front in the European Union.

Spain has seen a sharp rise in migrant arrivals of around 12,000. Spain’s new governmentt is taking a more open stance on migration including extending public health care to undocumented foreigners. A failure to reach an agreement threatens the EU border free travel area which is one of the biggest accomplishments of the EU’s sixty years of existence.