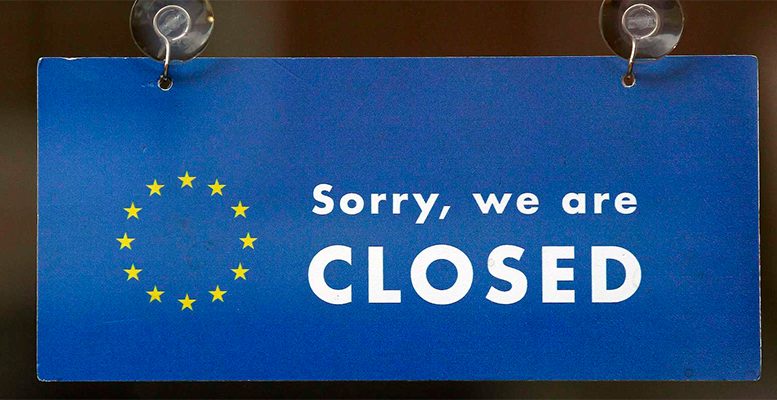 Brexiters hailed their victory with muted enthusiasm and undisguised concern. Prominent ‘leave’ campaigners called for restraint and patience, highlighting the need to assess strategy carefully before moving for a pull-out. They adamantly rejected triggering the process before informal talks with European partners could pave the way for a balanced outcome. Boris Johnson has even hinted the referendum might enable the UK to remain inside the Union with a stronger leverage for preferential treatment. Having failed to tell voters about the dismal outlook facing the Brexit option, now they are desperately trying to buy time to hammer an honourable way out.

But once the ballot casts such a clear-cut result, there is no room for back pedalling. Britain will have to leave, even if it takes longer than expected. Putting the process on hold would spark angry reactions and swell the UKIP ranks. The next conservative government has to send the letter starting the negotiations for a drift away Treaty. Informal talks could undoubtedly shape a starting point. But securing any firm commitment would prove elusive. As governments change in many continental countries over the coming months, no one can anticipate what their positions might be when the real talks begin. Until elections take place in Germany, Italy and France, the Brexit camp cannot expect any favourable treatment as its terms will become a divisive issue in domestic politics. Britain will feel how isolated it can be when confronted with its former partners. Once they agree on a joint position, it will only have an incredibly narrow margin for striking a better deal.

Goods’ trade will present no major problem as long as UK exports abide by EU rules and standards. Financial services may prove trickier, should continental countries seize the opportunity to promote their home markets to the detriment of the City. The UK could only prevent disruption by taking on board the full Community legislation, following the Norwegian approach. A harsh and humiliating blow for those advocating independence from the EU. Otherwise, it might face a widespread business relocation towards Frankfort, Luxembourg or Paris. Banks in the UK have already drafted contingency plans involving just such a massive overhaul to secure a firm hold on the EU market.

Brexiters also overlooked the backlash effect uncertainty would have on the British economy, as no one can predict how the planned divorce will end up. Investment will inevitably suffer, taking a heavy toll on jobs, production and income. Volatility will also hit financials, curtailing credit. Even if the pound and the markets recover some ground, further turmoil lies ahead whenever talks face a significant hurdle. Fickle and hesitant investors will fail to provide normal business conditions until the final terms of separation are agreed. Chancellor Osborne predicted a gloomy recession. Things might turn out less dire. But even under the best scenario, the British economy will suffer severe hardship. Let’s hope the worse doesn’t materialise for the sake of Europe.

The EU should swiftly react to Brexit, bolstering its integration drive. Many advocate closer political ties to overcome the current malaise. But tackling the Euro’s glaring shortcomings remains the most critical issue. A lack of a coherent economic policy and reluctance to build up financial solidarity are much to blame for the Eurozone’s underperformance. The currently skewed monetary union weighs heavily on recovery, as curbing the deviations in competitiveness are based on painful adjustments in salaries and income. Budget cuts to trim welfare benefits prompt the working and middle classes’ resentfulness, providing impetus for populist ideas. An ill-conceived austerity has inflicted more damage than the crisis itself, unleashing irrational fears towards immigration and open trade. If Europe is to survive, the sooner prosperity is delivered the better, in order to turn the tide. Otherwise, the EU might collapse, swallowed up by extremist credos. The British referendum should serve as a warning.