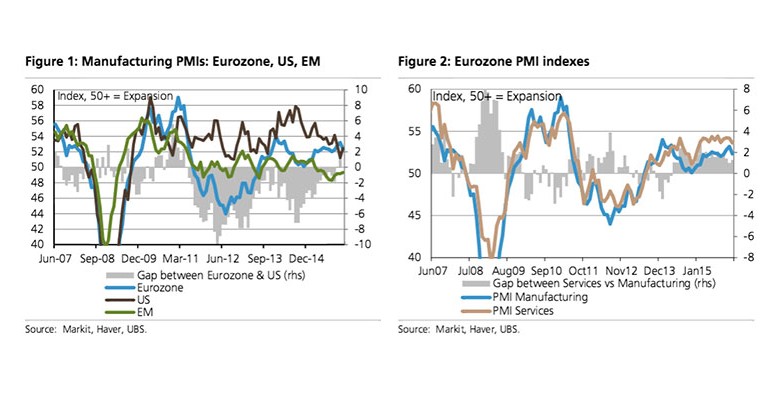 UBS | In this report, we aim to shed light on the question we have been asked most frequently in recent weeks: “Can Europe hold up when problems elsewhere are getting worse?” So far – i.e. since August when China concerns started to rise substantially – the Eurozone has held up respectably, which we attribute to the fact that European growth is mainly driven by domestic demand, not exports. We believe this should also provide Europe with decent resilience going forward.

Screening for early signs of trouble

Nevertheless, it is crucial to scrutinize the data for early signs of weakness. We have gathered the most important sentiment and activity data, and present them in chartbook format in this report. So far, the data by and large point to resilience. However, we noticed a weakening of some of the most sensitive indicators in January, such as manufacturing PMIs and some of their sub – components (new export orders, order – to – inventory ratio) as well as the German Ifo index. While it is too early to judge, this could be the start of a new trend. This gives particular importance to Eurozone flash PMIs and the German Ifo due on 22/23 February. We believe close analysis of the data will also be crucial for fine-tuning expectation s regarding the easing package the ECB is projected to deliver on 10 March.

While fallout into the export – orientated industrial sector would be a clear warning sign, a much mor e worrying signal would be if export weakness were to spill over into the domestic economy, i.e. retail and services. After all, while industry accounts for a limited 19.4% of Eurozone GDP, services represent an overwhelming 73.9%.

Export softness seems likely, but major damage to growth should be avoided

Overall, we suspect it is quite likely that sentiment and activity in the export – orientated sectors will indeed suffer setbacks over the coming months. However, we remain reasonably confident that major da mage to the domestic economy can be avoided, and hence that the Eurozone can escape a significant slowdown in growth. We continue to forecast GDP growth of 1.6% in 2016 and 1.7% in 2017, after 1.5% in 2015