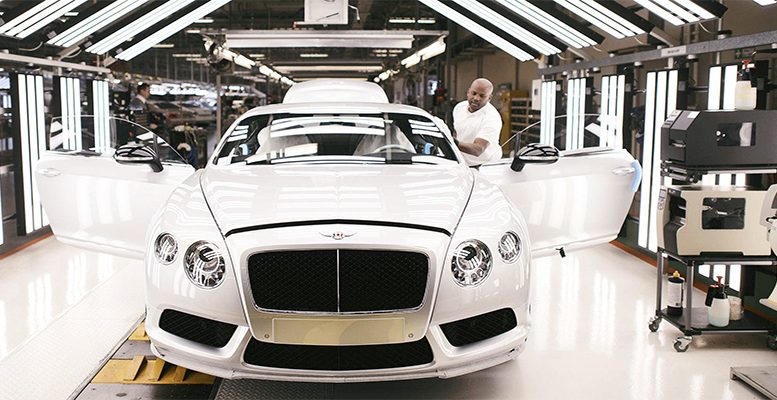 The carmaker Bentley, owned by Volkswagen, thinks a no deal Brexit would damage its profits

For more than eighteen months companies headquartered in the UK have demanded clarity to be able to reorganise their business in accordance with the Brexit supported by parliament. In November Carolyn Fairbairn, the Director General of the Confederation of British Industry, the main platform of leading managers, warned that “companies have accelerated their contingency plans: they are stockpiling their products, investing in warehouses, cutting jobs. None of these measures will create employment or new products”.

Given the inability of politicians to reach an agreement and put the interests of the country before those of political faction, in recent weeks some of them have pressed the panic button. The British Chamber of Commerce told The Guardian that 35 companies had launched their plans for transferring their operations out of the UK or had begun stockpiling their products in case of the disruption in trade of a no deal Brexit.

The head of the European aerospace giant Airbus was unrestrained in a video posted recently on its web site when he said that it was “a shame that, more than two years after the result of the 2016 referendum, that companies still cannot plan adequately for the future. Tom Enders, whose group directly employs 14,000 people in the UK, made an appeal to the British: “Please, don´t listen to the madness of the Brexiteers who say we will never leave here and will always be in the country because we have enormous factories here”.

With greater discretion, the Japanese electronics giant Sony has transferred its European headquarters from London to Amsterdam. The giant justified the move: “The creation of Sony Europe BV, in which Sony Europe Ltd will be merged, will allow us to continue our business without interruption when we leave the EU”. It is following its rival Panasonic, which also warned about the transfer of its headquarters to the Netherlands at the end of August. The head of its operations in Europe, Laurent Abadie, at that time expressed his fear that, if there were a sharp fall in corporation tax in, the UK would be considered as a fiscal paradise by the Japanese authorities, which would oblige the group to pay more taxes in Japan.

The carmaker Bentley, owned since 1998 by the German Volkswagen, faced the same concerns. “A difficult Brexit (without an agreement with the EU) would put in danger our chances of being profitable”, its boss Adrian Hallmark commented. Given that the possibility of a “fairly weak” agreement could not be rules out, it decided to stockpile components to guarantee production.

Figures published at the beginning of February by the Society of Motor Manufacturers & Traders (SMMT), the principal organisation of the car sector, which directly employees 186,000 people in the country, highlight the necessity of the sector’s access to the EU: despite exports to Europe falling 9.6% in 2018 in comparison with 2017, Germany, Italy, France and Spain remain in the top ten destinations for exports. The EU as a whole represents 52.6% of total car imports, with 650,628 vehicles. Finally, 15.7% of British exports go to countries where the UK has preferential agreements dur to its membership of the EU. These will disappear if it leaves the EU without agreement. Investment in the sector fell 46.5% in 2018, in part due to the cyclical nature of the sector, but also due to companies needing to wait for greater certainty over the future relationship between the UK and the EU. Every day more than 1,100 lorries important 40 million euros worth of component parts for British carmakers in the UK.

The largest supermarket group in the country, Tesco, as well as Marks & Spencer and the wine merchant Majestic Wines have also stockpiled wine, cans and non-perishable food products in case the lorries get caught in traffic jams at the border if there is no agreement.

The service sector, and in particular the financial sector, are not holding back. An employee of Credit Agricole comments that “twenty employees, dealing with European clients or selling products to central European banks, realised in December that they would return to Paris whatever kind of Brexit”. Dozens of employees of Société Générale and BNP have signed pre-contracts in France which will be activated immediately if there is no deal, according to some of. They will have to move to Paris. Dozens of UK and foreign financial agents have already announced the transfer of employees to Paris, Frankfurt, Madrid, Dublin and Luxemburg, although there is no exodus in the short term. At least for now.